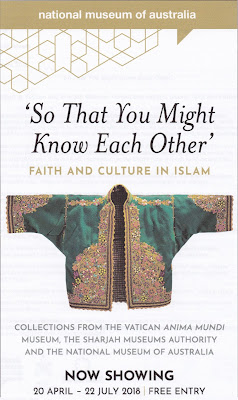 Reviewed by Frank McKone
May 6

Museum people love to tell you how many ‘objects’ they have in a collection.  For this exhibition, I prefer the French word ‘objets’, as in objets d’art.  ‘So That You Might Know Each Other’ is certainly not about exhibitionism.  The items on display are from the daily lives of people, from the many ordinary to the occasional wealthy, shaped and decorated in beautiful ways. 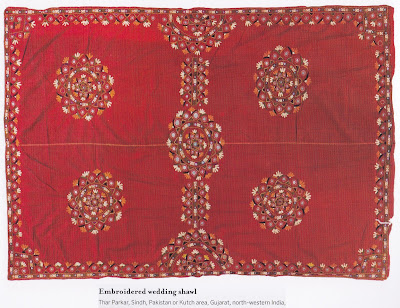 Is that what you expected from the rest of the title, ‘Faith and Culture in Islam’?  Perhaps not.  There is as much to learn from the story of this exhibition as there is to see in the exhibition.  Senior curator Carol Cooper’s quietly effervescent enthusiasm shines through.  An overhead spotlight projects an outline of the map of the world from Italy in Europe to China in the Far East, and round the corner to Australia in the South.

It all began with the Roman Catholic Pope Pius XI in 1925 and Fr Nicola Mapelli nearly a century later.  Let me explain. 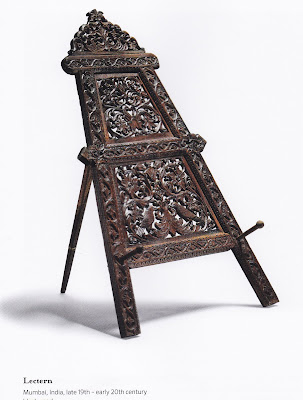 I think of the NMA as a dynamic museum, not stuffed with objects from the past for people to stare at, but always mounting changing exhibits which illuminate not only the past, but the present too, with implications for the future.  Songlines – Tracking the Seven Sisters is a terrific example (reviewed here 17 November, 2017).

The story of ‘So That You Might Know Each Other’ begins in a museum set up in the Vatican by an Italian pope, Ambrogio Damiano Achille Ratti, perhaps looking forward to the present Pope (who hails from South America).  Pius XI took the meaning of ‘catholic’ to suggest the church should collect in a museum – now known as the Anima Mundi – items which would show the philosophy of being ‘universal in extent – involving all’ (Macquarie Dictionary).

As I see it, there could be two motivations for this decision.  Translated as ‘the soul of the world’ it might be seen as Roman religious colonialism.  But I suspect that Pius XI also thought of bringing to the Vatican, which in those days was an insular organisation, the ‘life’ of the world to make his administrators and Italian Catholics aware of the variety of other peoples’ beliefs and practices.  It is this interpretation which I’m sure Fr Mapelli, and the Director of Vatican Museums, Barbara Jatta, are working from.  It makes the translation something more like ‘Welcome to the World’.

Though I, personally, don’t subscribe to any religious belief, I see in their work the human rights and understanding value in a cooperative venture with the Sharja Museums Authority of the essentially Muslim society in the United Arab Emirates.  I don’t doubt that Jorge Mario Bergoglio, who was elected the 266th pope of the Roman Catholic Church in March 2013, becoming Pope Francis, and the first pope from the Americas, fully supports cross-cultural cooperation.  His choice of the saint’s name ‘Francis’ is obviously significant, and bodes well for human rights.

On the other side of the hand-shaking is a human rights interpretation of the essential Islamic text, the Q’ran.  Though I, again personally, have concerns about the parts of text that seem to be divisive, encouraging fighting in defence against believers’ enemies, there are two quotes which underpin this exhibition.

In Chapter 57, Iron, after the early prophets Noah and Abraham, “We sent other apostles, and after these Jesus son of Mary.  We gave him the Gospel and put compassion and mercy in the hearts of his followers.” (trans. N J Dawood, Penguin 1956)

The other includes the title of the exhibition: "O Mankind, We created you from a single pair of a male and a female and made you into nations and tribes, so that you may know one another. Verily the most honored of you in the sight of God is he who is the most righteous of you" (Chapter 49, The Chambers).  This translation is from an excellent paper by Abdul Malik Mujahid, delivered at the International Council of Christians and Jews (ICCJ) Conference, Istanbul June 23, 2010.
http://www.iccj.org/redaktion/upload_pdf/201011262022430.Mujahid_keynote.PDF

In this brief verse, Islamic scholars have been able to draw several fundamental Islamic principles which are reaffirmed elsewhere in the Quran and the Prophet’s teachings:

 God addresses all of humanity, not only the Muslims.

 God says that He created us from one man and one woman, thus making us all
brothers and sisters.

 The verse invalidates the claims of superiority due to one’s birth by stating that all
are born through a similar process, i.e. from a male and female.

 God is the One who made human beings as part of tribes and nations as a means
of identifying and differentiating. This is not meant to be a source of superiority
or inferiority, nor as a contributing component of tribalism, caste systems,
nationalisms, colonialism or racism.

 The only measure of greatness among human beings is at the individual level, not
on a national or group level, based on the characteristic called “Taqwa” in Arabic.
This word means God-consciousness.

 This singular criterion of preference, Taqwa, however, is not quite measurable by
other human beings since it deals with the inner self. Therefore, human beings
must leave even this criterion to God to decide rather than using it to judge each
other. At the same time though, this principle does not mean that we are unable to
differentiate between right and wrong behavior, nor does it prevent us from acting
against wrong actions. Rather, it discourages the human tendency to ‘sit in
judgment’ of others. 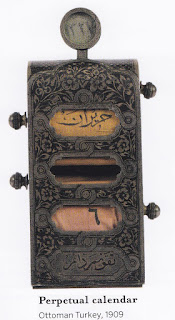 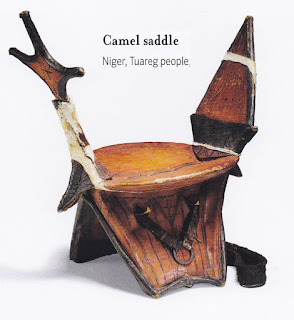 And so, as you explore the extensive exhibition at the National Museum of Australia,  you will see objects from a camel’s saddle, a desk calendar, a lectern, an embroidered wedding shawl, among “over 100 precious 18th to 20th Century objects from over twenty countries” illustrating “the evolution of Islam across the globe and celebrates diverse Muslim societies from the Middle East, through to Africa and India, China and South East Asia” – and including objects and photos of Muslims in Australia, from early contacts with Indonesia several hundred years ago to those who came in substantial numbers from 1860.

Though the catalogue might seem expensive at $30, it is a wonderful record of the exhibition to keep, not only for the excellent quality of the photos of the objects, but especially for the detailed historical and cultural information in the text.

We can be justifiably proud of the humanity expressed in the meeting of the minds of Fr Nicola Mapelli, Ulrike Al-Khamis and Carol Cooper in bringing together the best of the collections in the Vatican Anima Mundi Museum, the Sharjah Museum of Islamic Civilization and our own National Museum of Australia.  As Dr Barbara Jatta writes: “As I followed the preparation of this exhibition, I was sincerely struck by the beauty and sophistication of the Islamic world – I saw firsthand the refined productions of people living across a vast area stretching from Africa to Australia.”

For Australians now as much as for Pope Pius XI in 1925, such appreciation of others’ beliefs and cultures is essential for a better future around the world.  This exhibition is not to be missed. 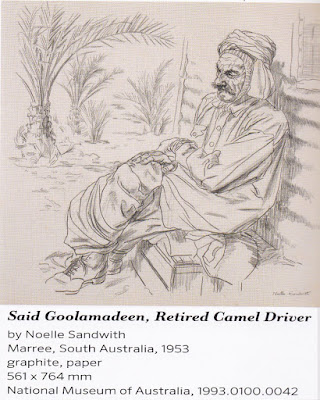