MELODIES FROM THE BELLE ÉPOQUE IN PARIS 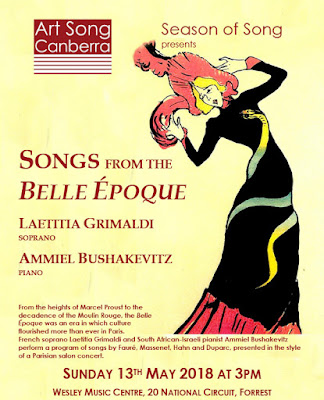 
The Belle Époque (or ‘Beautiful Era’) was a period of about 40 years ending in the First World War in which, especially in Paris, the arts flourished and many masterpieces of literature, music, theatre and visual art were created.

For Art Song Canberra, soprano, Laetitia Grimaldi, and pianist, Ammiel Bushakevitz, presented a sublime afternoon of songs and piano works by composers active in that period.  This is the first time they have performed together in Australia.

Laetitia Grimaldi Spitzer was born in France, lived in Lisbon and London and commenced her vocal studies with Teresa Berganza.  She continued her studies in New York at the Manhattan School of Music and obtained a Masters degree from the Juilliard School.  She enjoys a busy international career in recitals and in opera. 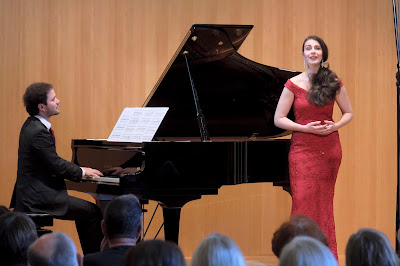 Ammiel Bushakevitz was born in Israel and grew up in South Africa.  He studied in Leipzig and Paris and has won numerous prizes for his piano playing in Europe, performing regularly in festivals and concerts around the world. 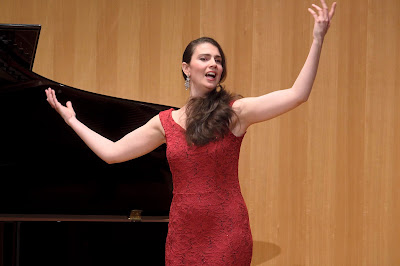 Laetitia Grimaldi gave excellent performances of songs by Duparc, Canteloube, Fauré, Chaminade, Hahn and Delibes.  Her relaxed manner gave her an immediate rapport with the audience and she sang confidently and with great precision.  In the songs that required humour, seductiveness or deep emotion, she was especially convincing.  The four songs by Chaminade were perhaps the highlight of her performance as she was able to show all facets of her voice and acting ability with these very contrasting works.

This was an excellent concert with two highly skilled artists and a very well chosen set of works from the time of the Belle Epoche.

This review was first published in the Canberra City News digital edition of 14 May.

Len Power’s reviews are also broadcast on his ‘On Stage’ performing arts radio program on Mondays and Wednesdays from 3.30pm on Artsound FM 92.7.
Posted by Canberra Critics Circle at 7:45 PM