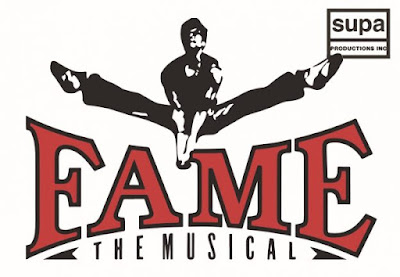 ‘Fame – the Musical’, based on the hit 1980 movie, was first produced in 1988 in Florida USA and then toured the country.  While it never played Broadway, the musical has been an international hit ever since.

SUPA productions and director, Jarrad West, have given the show an energetic and colourful production with a young, enthusiastic cast.  They manage to overcome a contrived script and clichéd characters surprisingly well.

There are some good performances amongst the cast.  Sophie Edwards is a standout as a believable and real Serena, particularly with her song, ‘Let’s Play A Love Scene’.  ‘Bring On Tomorrow’ is well acted and sung by Pippin Carroll as Schlomo and Maddy Betts as Carmen.  Maddy Betts gets the best number in the show, ‘Fame’, and makes it her own.

Jack Tinga gives a fine characterization as the swaggering, confident Tyrone and shows his strong dancing skills in ‘Dancin’ On The Sidewalk’.  With her heart-felt and carefully judged singing of ‘These are My Children’, Janie Lawson overcomes the clichéd character of a nasty schoolteacher who really has a heart of gold.  She also shines with Shell Abdoo as another teacher with ‘The Teacher’s Argument’.  The numerous other cast members all get their moment to shine.

Jarrad West keeps the show moving at a cracking pace with well-thought out and swift scene changes.  He wisely puts the main effort into the musical numbers to take our minds off the predictable script.  He is helped with a good set designed by Chris Zuber, Martin Searles and himself.  Michelle Heine’s choreography is excellent and she has a cast who can dance it confidently.  The costume team of Fiona Leach, Jennie Norberry and Lucy Jones have given the cast colourful and eye-catching costumes that gleam in the fine lighting design of Philip Goodwin.

Katrina Tang has done a fine job with musical direction and the large orchestra play the score very well.  It’s expected that the sound would be loud for this type of musical, but why are the cast shouting their lines when they seem to be having a normal conversation?

This high-energy production has a lot to admire and this talented cast ensures that you’ll have a good time.

Len Power’s reviews are also broadcast on his ‘On Stage’ performing arts radio program on Mondays and Wednesdays from 3.30pm on Artsound FM 92.7.
Posted by Canberra Critics Circle at 10:16 AM