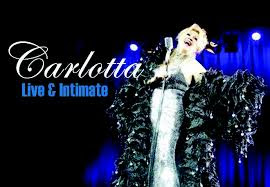 It’s been seventeen years since Australia’s most famous transsexual entertainer last played sell-out seasons on the tiny stage of Queanbeyan’s School of Arts Café, but when she returned to Queanbeyan for her two performances at the Queanbeyan Performing Arts Centre, Carlotta was given a heroine’s welcome. Many in the audience were recalling her performances at the café, others had never seen her perform, but had been attracted by the recent telemovie of her life, or her appearances on Studio 10, and were keen to see her in the flesh. Whatever their reason, no one left her performance unimpressed.
A striking figure in a sparkling red gown and high heels, meticulously coiffed blonde hair framing her face, she made her entrance singing “No Business Like Show Business”. Looking not a day older than when she last performed in Queanbeyan all those years ago, Carlotta tossed off a few dance steps, demonstrating that she could still impress with her glamorous showgirl strut, before singling out some targets in the audience for some affectionately barbed insults.

Later in the show, while confiding that she was 73 years old, she drew admiring gasps from her audience when she removed the elaborate blonde wig, to allow her own luxurious blonde locks to cascade to her shoulders. The biggest surprise, however, was that Carlotta was singing her songs in her own voice, rather than mime them, as had been her practice throughout her career.

She now delivers “Nobody Does It Like Me”, “For Once In My Life” and “As Time Goes By” in a warm, well-phrased light baritone, which sits comfortably with her appearance, and allows her to point up the lyrics of her songs to compliment the story-line of her show.

Having enjoyed a career spanning more than 50 years, there are plenty of stories to be told, and she delivers them in her trademark acerbic, self- deprecating style. Sometimes she names names, but for the more outrageous, she merely hints, informing her audience that, “you’ll have to wait until I die for the best ones”.

She pays tribute to singer, Ricky May , in an up-tempo arrangement of “The Lady is a Tramp”, and to entertainer, Jeanne Little, touchingly included in her encore, Stephen Sondheim’s anthem to theatrical survival,  “I’m Still Here”, for which she’s substituted Sondheim’s lyrics with some racy lyrics of her own, to trace the highs and lows of her career.

Ever the true professional, Carlotta holds her audience in the palm of her hand for the entire performance, talking to them directly as if they’re all her besties, and after an hour of racy, politically incorrect gossip, bawdy jokes, and favourite showbiz songs, they’re more than happy to be included.
She may no longer be the befeathered showgirl of yesteryear, but alone on stage, live and intimate, Carlotta remains one of the county’s most formidable , engaging and accomplished  performers.
This review also appears in Australian Arts Review. www.artsreview.com.au