THE IMPERIAL BELLS OF CHINA 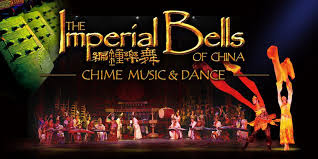 Perhaps it was the title of the show, which didn’t really hint at the astonishing spectacle involved, but The Imperial Bells of China attracted a disappointingly small audience to the first of its two Canberra performances.

The 2,400 year old Imperial bells themselves were unearthed in Hubei, China in 1978. Their discovery provided the inspiration for the Hubei Opera Theatre to create a spectacular production to showcase the history of the Seven Kingdoms of the Chu State which existed in China between 403 and 221 BC. This production has been touring the world since 1983, but this is the first time it has visited Australia.

The curtain opens to reveal a stage hung in lavish crimson, pink and gold hangings. Replicas of the Imperial bells, painstakingly reproduced using the same materials as the originals to insure the exact same sounds, dominate the scene. Other wind and string instruments found with the bells are played by musicians, arranged in rows, wearing sumptuous costumes and headdresses. Together, they produce an exquisite orchestral sound.

Surrounding them, dozens of elaborately costumed warriors equipped with gold-tipped lances, not only add to the spectacle, but also contribute a splendid massed drum exhibition  heralding the arrival of teams of exquisitely costumed singers and dancers, who perform dances representing the various kingdoms.

Scene after scene flows by, each more exquisite and spectacular than its predecessor. Some are inspired by ancient poems, others by daily routine. One particularly memorable item, “Collecting of Mulberry Leaves, Cultivation of the Land” featured a troupe of young women wearing flowing green and white costumes who performed a graceful dance with strikingly exaggerated hip and back movements. Immediately following, another troupe of male and female dancers, clad in red and mulberry coloured costumes, depict cheerful farmers going about the business of cultivating their land.

The finale, entitled “Great Royal Banquet Ceremony” featured the entire 60 or so members of the company in a riot of cleverly choreographed colour and movement in which dancers, both male and female, wore costumes with extraordinary long silk sleeves which they energetically fling into the air to create spectacular patterns.

A voice- over narration, and English and Chinese surtitles displayed on television sets positioned on each side of the stage, kept audience members informed about the history and significance of what was being performed on stage, adding to the enjoyment of the presentation.

Impressively staged with superbly trained singers, dancers and musicians, “The Imperial Bells of China” is one of the most spectacular Chinese cultural presentations to visit Australia.