CAROLE KING - The Songbook of her life. 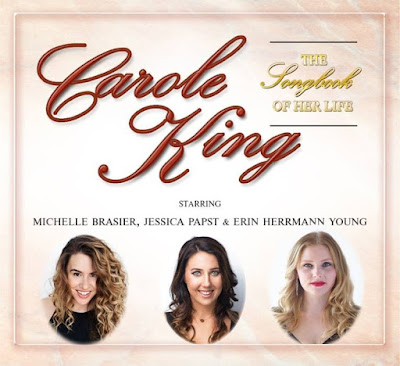 Carole King is one of America’s most prolific songwriters and an accomplished singer. In a 50 year career, record sales of her songs, performed by herself and most other leading contemporary songsters, are estimated to be in the vicinity of 75 million.  She’s been the subject of a Broadway show, “Beautiful” and successfully toured Australia in 2013.

For many, her thoughtful, inspirational and uplifting songs have provided a songbook for their lives, so a show promoted as “a two hour spectacular concert which will have you laughing and crying as the songs of this multi-award winning artist come to life on the stage” offered the tantalising opportunity to revisit these songs.

Unfortunately, far from spectacular, the concert proved to be a rather lack-lustre affair. It started off unpromisingly when the three backing musicians, two guitarists and a drummer, (who must remain nameless as there were no programs to identify them available) took the stage early. Arranged unimaginatively on a rostrum across the back of a black draped stage, they checked the tune of their instruments, and then talked among themselves, until eventually musical director, Shanon Whitelock arrived on stage. Seating himself at the Steinway piano Whitelock and the band commenced an upbeat arrangement of “I Feel The Earth Move”.

The three vocalists, Michelle Brasier, Jessica Papst and Erin Herrmann Young, each dressed in a sparkling black gown, entered, and before singing a note, one called out, “Hello Canberra, are ya having a good time? … Have we got any Carole fans in the audience? ”, which sort of set the tone for the rest of the evening.

Over the next two hours some thirty of Carole Kings songs were presented, punctuated by an uninspired narration listing details of Kings’ life and achievement, which often sounded as if it had been lifted directly from Wikipedia, and delivered in turn, with a little attempt at  enthusiasm, by each of the singers.

The songs were performed as trios, duets and solos and mostly efficiently sung. Occasional   highlights such as Jessica Papst’s “Nightingale” , Michelle Brasier’s, “You Are The Reason” and the duet “The First Day in August”, hinted at what this concert could have achieved had the singers been more interested in capturing the essence of Carole Kings songs rather than  using them to demonstrate their riffing skills.

Overall this show proved to be a rather dispiriting experience with the lack of finesse in the staging and presentation suggesting that it would have been more successful in a less formal setting.