Hunt for the Wilderpeople 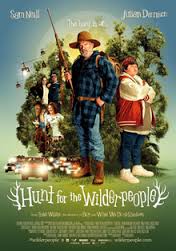 It used to go without saying that brandishing a fist at the authorities was a staple of Australian film. It probably still is. We know how to give it a good shake, so this jaunt through the New Zealand wilderness with a couple of endearing fugitives on the run from nosey and incompetent authority is handled in ways that will make the rebellious antipodean proud. Hunt for the Wilderpeople is a film to embrace for its spirit as much as for its skill.

This story about a kid called Ricky Baker (Julian Dennison) who just needs a good home is told in ten chapters, a salute to the popular novel from which it is adapted, 'Wild Pork and Watercress' by Barry Crump. At the very least, Ricky needs a home that will take him in, because he is a handful who pitches stuff, does graffiti, and packs letter boxes with fireworks. 'A bad egg', just ask Paula (Rachel House), the dragon lady from family services for her view, and no one will have him.

When Ricky arrives at his new home deep in lush New Zealand wilderness, it is his last chance, the only thing between him and an institution. Never mind that. The ramshackle house and new foster parents, Bella (Rima Te Wiata) and her husband Hec (Sam Neill), are so uncool for preternaturally street-wise Ricky, hip-hop officiando, that he is ready to leave after a 30-second tour of the property.

No chance, of course he has to stay. Before long Bella’s love and kindness and the comforts of home – a birthday cake with candles, his very own pet dog (Tupac), a water bottle to warm his bed, are all new experiences that win him over—though he tries running away a few times. Sadly, no sooner is he happily ensconced in the bosom of his new family, than Bella is cruelly taken from him, and from Hec. A tragedy swiftly passed over, segueing into funeral scenes that serve as an excuse for more hilarity.

Ricky and Tupac light out for the territory, with Hec in hot pursuit. When Hec injures his ankle it introduces a period of enforced togetherness. That's the chapter called 'Broken Foot Camp' and it's when Hec and Ricky finally bond.

Family services think their disappearance is an abduction and three hunters who the pair encounter determine, after a cleverly scripted interchange, that Hec is a predatory paedophile. When Ricky and Hec attempt a getaway in the old truck borrowed from their host, hermit and fellow fugitive from society, Psycho Sam (Rhys Darby), things take a turn for the worse as family services, the police, the army, and bounty hunters and every unwelcome outside interference are ranged against them. As the choppers, tanks and military hardware close in, it's Paula who is orchestrating the manoeuvres through her megaphone. The fun never lets up.

On top of telling a good yarn, the very talented Kiwi director and screenwriter Taika Waititi has made liberal use of chase movie references, popular music, and even managed some asides on the Lord of the Rings in passing. Despite all the diverting distractions in this highly entertaining and big-hearted movie, we are with Ricky and Hec all the way.