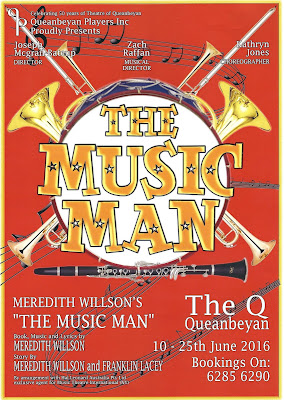 Joe McGrail-Bateup’s production of ‘The Music Man’ for Queanbeyan Players captures the innocence of the show’s era and the enthusiastic playing of his large cast makes for an enjoyable evening of song and dance.

‘The Music Man’ opened on Broadway in 1957 and ran for over 1300 performances.  The story concerns a conman in 1912 who, posing as a bandleader, tricks innocent townsfolk into paying for musical instruments and uniforms and then skipping town with the money.  In River City, Iowa he meets his match in prim librarian, Marian.

The show demands a strong actor/singer to play the conman, Harold Hill, and Gordon Nicholson is believably hard-edged yet charming.  He sings the difficult patter songs very well.  As Marian, pretty Deanna Gibbs is delightful as the prim librarian who is no fool and sings beautifully.

There is a large amount of dance in this show and Kathryn Jones has excelled herself with her work with this large cast, especially in the big ‘Seventy Six Trombones’ and ‘Shipoopi’ numbers.  The accomplished young dancer, Liam Jackson, is a standout in the dances.

It would be a huge task to provide the period costumes for this show but designers Janetta McRae and Norma Roach and their team of costume makers have done excellent work, providing costumes that are colourful and attractive.

Musical direction by Zach Raffin is very strong with clear diction from the singers and fine playing by the orchestra after a few wobbly notes in the Overture.  The set by Ian Croker is practical and attractively painted.  Lighting by Hamish McConchie adds nicely to the show’s atmosphere.

Joe McGrail-Bateup has done a good job with his directorial debut.  Cues need to be picked up quicker by the cast, though, and some of the set changes were slow and looked under-rehearsed.

For anyone interested in musical theatre, ‘The Music Man’ is a landmark musical.  Queanbeyan Players’ production is nicely done, very entertaining and will appeal to children as well as adults.

Len Power’s reviews can also be heard on Artsound FM 92.7 ‘Artcetera’ program from 9am on Saturdays.
Posted by Canberra Critics Circle at 10:50 AM