Witness For The Prosecution - Canberra Repertory 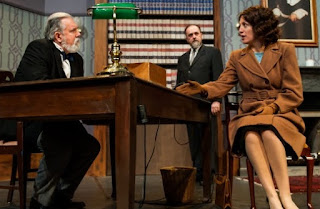 Leonard Vole (Cole Hilder) stands trial for murder, accused of killing a wealthy old woman who has left him a substantial inheritance.  The circumstantial case against him is damning but his pleas of innocence ring true.  Is he a calculating murderer or a victim of circumstance?

Witness For The Prosecution, Agatha Christie's follow-up to her super-successful The Mousetrap, is a play that has aged badly - not that it had much merit to begin with.  The play is clogged with exposition, endlessly sifts minute details, and hinges on absurdities that would be uncomfortable even in melodrama.

Fortunately the cast of this production are game, and like prospectors sift an unlikely soil for moments of fun and deeper resonance.  Insightful direction by Aarne Neeme has latched onto the gender politics lurking within the script, and the battle between men and women carried out in the play is often more engaging than the dull facts of the murder trial.

Agatha Christie's characters are thumbnail sketches, rapidly recognisable types that help her plot-heavy novels crackle along without getting bogged down in elaborate psychology.  On stage, the same characters register as two-dimensional, forcing the actors to supply the depth that the writer has glossed over.  Through no fault of the actors, the central courtroom scene drags badly, with wrangling over shirt cuffs and voices heard through doors just homework that the writer is making us complete before we can get to the real fun that happens when Leonard's unpredictable wife Romaine (Emma Wood) finally takes the stand.

The play is in fact held back by its determination to be a murder mystery.  In the Christie style, with a little imagination anyone could be made out as the murderer - even the judge could secretly have a line in bumping off old ladies.  But because anyone could do it, none of the evidence really matters - after all, the facts can always be turned on their head by the next shocking revelation.  And since none of it really matters, having it fed to us in elaborate and exhausting detail becomes a chore, particularly when there are much richer and more interesting matters to explore.  I frequently felt like I was watching a reading of a novel that could be adapted into an excellent episode of Poirot - the play is simply in the wrong medium.

However the cast work with what they have, in some cases quite deftly.  Pat Gallagher is lively as Leonard's defender Wilfred Roberts.  His affectionate rivalry with opposing council Mr Myers (Peter Holland) becomes quite engaging, with the two scoring points off each other not like lawyers locked in battle but like gentlemen competing in a darts tournament.  Cole Hilder is likeable as the young man on trial for his life and we feel genuine sympathy for him.  Emma Wood meanwhile excels as his feisty wife Romaine, the noticeable age difference between her and her husband justified by her stand-out, firecracker performance.  The cast overall give engaging and believable performances.

Besides the obligatory murder mystery the play has a lot to say on the battle of the sexes.  The opening scene between servants Carter (Ian Hart) and Greta (Morgan Heath Williams) establishes the law as a stodgy, stuffy boy's club where the only choices available to women are servitude or anarchism.  Inevitably, the women choose anarchy, and when strong female characters such as Romaine and Alice Ferguson's servant/companion Janet take the stand they force their own rules on the bemused but nervous court.  The men who take the stand are much better behaved.

It's far from a feminist manifesto that dismantles the patriarchy - for the most part, the men are right and just - but awareness of what it is like to be a woman in a system run by men is what gives the script whatever freshness it has.  In one very funny moment the judge (Saban Lloyd Berrell) mansplains to the jury that a woman in her 50s could have any number of perfectly innocent reasons for reading literature where more mature women serendipitously bed young swains.  Moments like these are the play at its best.

Witness For The Prosecution is a weak play, a potboiler that has lost its flavour.  This production benefits from decent direction and casting, but the play itself is due for not so much for a revival as a remake.  One trick in the final act could be effective in a novel, but is genuinely confusing and distracting when played out on stage.  But that said, there were some gasps in the audience at the final reveal, so perhaps some audience members will plunge into Agatha Christie's trap.

The tragedy of Witness For The Prosecution is that it is actually a pretty good mystery, worthy of Agatha Christie at her sneakiest.  But as a play, it has the lukewarm recommendation that it is slightly better than The Mousetrap.  Aficionados of the Golden Age murder mystery will find a lot to enjoy; others may find the endless dithering about open windows and shirt cuffs trivial.  Detective fiction has moved on from this minute mystery sleuthing but this play is a relic from a different time.
Posted by Canberra Critics Circle at 9:08 AM