The Big Dry adapted from the novel by Tony Davis 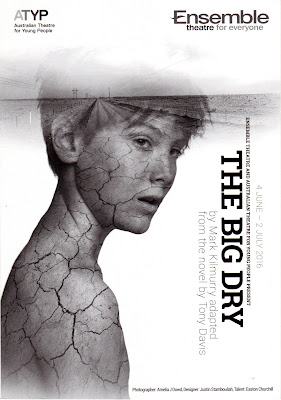 Cast:      Jack Andrew (whom I saw) or Noah Sturzaker as Beeper
Sofie Nolan as Emily
Rory Potter as George
Richard Sydenham as Rabbit Man and Man from next door.


As I watched this post-apocalyptic scenario, I was reminded of the novel The Road, by Cormac McCarthy.  I found that work difficult to get through, because of its unrelenting grimness.  I haven’t read the children’s novel The Big Dry, but the relationship which develops between the girl, Emily, who breaks into the relentlessly sandstorm-blasted house, and the two boys she finds there, George – a young teenager like her – and his much younger brother nicknamed Beeper, makes the chance of humour, lively activity and even warmth of feeling seem possible.

I’m guessing, though, that Kilmurry has tried, in 75 minutes, to put in too many of the events in the novel, resulting in very short scenes between blackouts as the blasts hit the house again.  The developing relationship, from the time before Emily’s intrusion to her being blown away, and the boys’ decision to follow her, even though the man from next door has finally come to help; that development is pictured in brief snatches, little vignettes, which give us too little time to empathise or identify with the feelings of the three children.  The play becomes a series of plotted points, rather than an absorbing personal drama which engages us.

This is a pity, because Corfield’s directing of the scenes is very effectively done, and his three young actors Jack Andrew, Sofie Nolan and Rory Potter played very professionally (though I thought Rory needed to find more variety in voicing).

For an adult audience, I found myself looking for a different Irish comparison – with J M Synge’s Deirdre of the Sorrows – to turn the drama into something much more mythical.  Though Synge’s story seems nothing like Davis’s, in Ireland when the troubles cannot be overcome, the acceptance of death becomes mythologised.  It is often in the spirit of a woman that death appears to lead ordinary mortals away, and this is what happens in The Big Dry.

For the boys, Emily is both a source of life, offering George solutions to an impossible task and mothering Beeper.  But in the apocalyptic future – maybe at the extreme phase of the climate change we see beginning today – there is no final answer.  All the mythical figure can do is to provide, in her unseen death, blown away by the might of the roaring wind, just enough hope in the minds of the boys, though we know, and Rabbit Man knows, that wanting to find her can only lead them to their deaths.  Irishman Synge would do this using highly poetic language, in the Irish tradition, especially for the woman figure.  Here’s an example:

DEIRDRE (very quietly).  Am I well pleased seven years seeing the same sun throwing light across the branches at the dawn of day?  It’s a heartbreak to the wise that it’s for a short space we have the same things only.  Yet the earth itself is a silly place, maybe, when a man’s a fool and talker.


Though this level of drama may seem too much for a children’s play (if that was the intention of ATYP in this production), I can claim to have very successfully directed Year 8 students in Synge’s Riders to the Sea.  A novel is one thing, to read and let your imagination fly; but drama of the dread future of The Big Dry needs words of poetic power, far more than this adaptation offers.  With such poetry, I can promise the young actors so much more depth of experience for them to cultivate in their future careers.