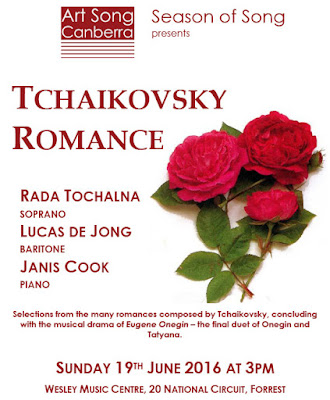 ‘Powerful and expressive’ is how pianist, Janis Cook, described Tchaikovsky’s music at the start of Art Song Canberra’s ‘Tchaikovsky Romance’ concert.  The program of songs and music was cleverly arranged, starting from the joy and innocence of young love, through the pain of parting from a lover and the continual striving for happiness through love.

Soprano, Rada Tochalna, began with ‘It Was In Early Spring’ and perfectly captured the innocence of youth in this beautiful song.  ‘If Only I had Known’ displayed not only her fine voice but also her strong acting ability, making the doubt in the mind of a young girl waiting for her lover completely believable.

Lucas De Jong, baritone, joined with Tochalna in a duet, ‘Frenzied Nights’.  His rich baritone nicely complemented her soprano in this nostalgic song.  One of the highlights of the concert was Lucas De Jong singing, ‘Why?’, a sad song about the state of mind at the end of a romance.  The song showed De Jong’s powerful voice and technique extremely well, bringing the emotion of the song through strongly.  Accompaniment on piano for this song by Janis Cook was especially fine.

At the end of the concert, we were given the final scene from Tchaikovsky’s opera, ‘Eugene Onegin’ – a perfect choice for both singers to display the full range of emotion in both voice and acting.  Their performances were powerful and very moving.

All of the songs for the concert were sung in Russian and it was a delightful surprise to hear the singers perform an encore in English of the tongue-twisting song, ‘Tchaikovsky’, made famous by Danny Kaye in the Broadway musical, ‘Lady In The Dark’.

This was yet another fine concert from Art Song Canberra.

Len Power’s reviews can also be heard on the ‘Artcetera’ program on Artsound FM 92.7 on Saturdays from 9am.
Posted by Canberra Critics Circle at 9:50 AM