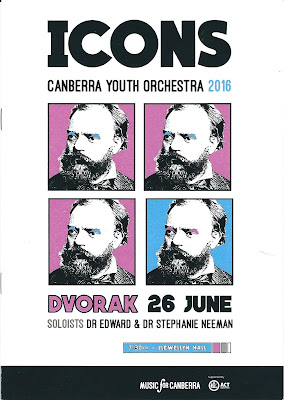 With Leonard Weiss conducting the Canberra Youth Orchestra and featuring piano soloists Dr. Edward Neeman and Dr. Stephanie Neeman, the second Icons subscription series concert promised an exciting and varied program of Gershwin, Mendelssohn and Dvorak.  We were not disappointed.

Commencing with Gershwin’s ever-popular ’Rhapsody in Blue’ with Dr. Edward Neeman at the piano, the orchestra gave a fine performance of this classical yet delightfully jazzy piece.  Dr Neeman’s piano playing was superb, bringing out extra colours in the music here and there in his individual interpretation.

Mendelssohn’s Concerto for Two Pianos and Orchestra in E Major is one of only two works by Mendelssohn for multiple soloists.  Composed when Mendelssohn was only 14, the work displays an amazing maturity for one so young.  Nicely played by the orchestra and soloists, it was fascinating to watch the communication between the two pianists and the sheer joy they were experiencing in the playing of it.  The second movement was especially lush and lyrical and was played with great sensitivity, although there was some less than precise work from the trumpets.  The final movement was grand and exciting with a thrilling finale.

Dvorak’s Symphony No. 8 is one of his shorter symphonies, filled with folk-inspired melodies.  The melancholic beginning of the first movement had notably excellent playing from the cellos, clarinet and horns.  The trumpet fanfare was very well-played and the playing by the strings in the final movement was especially fine.

Leonard Weiss conducted with great care and sensitivity.  This was a very entertaining concert with well-chosen works, strong and confident playing by the orchestra and an opportunity to see two master international pianists in top form.

Len Power’s reviews can also be heard on Artsound FM 92.7’s ‘Artcetera’ program on Saturdays from 9am.
Posted by Canberra Critics Circle at 10:16 AM