Things I Know To Be True by Andrew Bovell 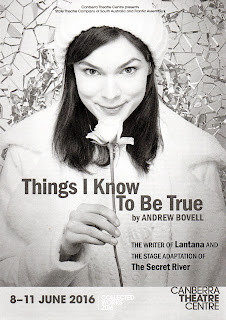 This is a play of deception and revelation – deceptively simple in structure, revealing all about a very human family.  Rosie, returning from her ‘gap’ two years in Europe, makes a list of ‘all the things I know to be true’ in her effort to become ‘grown up’.  The list is very short.  She knows she knows very little, especially about love, after her travel experiences.

At the end of the play she has grown up.  Her new list is still not very long.  But it is a list of the truths that we all know if we allow ourselves to think about them.  This revelatory process, I think, makes this play perhaps Bovell’s best.

The script is highly original in style, yet brings to mind the presentational form of Shakespeare’s writing.  As a play about a modern suburban family, Things I Know To Be True does not use the heightened poetic language of a Shakespeare, but reminded me very much of two other powerful plays – Death of a Salesman by Arthur Miller and The Glass Menagerie by Tennessee Williams.  “Life just goes on,” concludes Rosie.

The link to the presentational form is the soliloquy.  At crucial moments, the members of the family – Rosie (unexpectedly born after a considerable gap), her elder sister Pip and older brothers Mark and Ben, and her parents Bob and Fran – each present a soliloquy in the Shakespearean manner.  Each speaks as if to her/ or him/self, in a separating spotlight.  We feel they are speaking directly to us.

Then the directors have taken this form further, into silent choreographed movement episodes, in which the family physically lift Rosie or Fran, ‘flying’ them horizontally above their heads.  At other times characters briefly hold positions connecting them to another, such as a head on a shoulder, a touch on the back.  Highly significant is the pose adopted by Bob near the beginning and again near the end of the play.

This aspect of the approach to the production reminded me strongly of the work of Australia’s most original dance-theatre company, Force Majeure, where the news is not good: ( http://www.forcemajeure.com.au/news/ ) “Force Majeure Defunded by Newly Shrunk Australia Council”.  Let’s hope that the State Theatre Companies’ statement has effect at the Federal Election on July 2, 2016: “The Confederation of Australian State Theatre Companies (CAST) has welcomed the arts policy platform announced by The Greens on Monday 30 May and the Labor arts launch on Saturday 4 June.” ( http://www.statetheatrecompany.com.au/home/news/newsarchive/news-176/ )  Rosie might say “Life just goes on,” but we can only hope for the best for new works of art after the car-crash of ex-Arts Minister George Brandis in last year’s budget.

If you think my political comment is not appropriate in a review of a family drama, then see the play for yourself.  This family is in dire straits because of the closing down of car manufacturing in South Australia (Bob), the inadequate staffing of public hospitals (Fran), the lack of proper legal recognition of trans-sexual status (Mark), and the lack of ethics in the financial world, where Ben skims “because I can”.

It’s amazing, and welcome, to see how much humour Bovell could extract from this family’s life.  Though I can’t find the Brandis story very funny, there was a great positive feeling for me personally in this play.  When I was Rosie’s age, in the very year Andrew Bovell was born, I wanted to write a play like this.  The result was piss-weak and has been consigned to the depths where it belongs.  But Rosie decides to take up a course in creative writing.  And like her author (whose very first play did a lot better than mine), maybe she’ll write like Bovell when she is 54.

I just hope arts un-funding will not let down our creative artists of the next generation.  After all, even William Shakespeare was one of the King’s Men.

Lastly, but absolutely not leastly, the design and casting for this production is top-notch.

The setting is a garden – very open, but with small lights hung all over the stage, reminding me of the stars in Australian skies to contrast with Rosie’s experience travelling in Europe.  The impeccably pruned rose bushes grow remarkably during interval, and become a significant emblem for Bob’s life with Fran – an Arthur Miller or Tennessee Williams device.

The music and sound is subtle, but used very dramatically at the appropriate moments.  Nicely done!

The most difficult part must be to find such expert actors who all physically fit the parts so well, when dressed, as they are, so correctly for their roles as they change with the development of the story.

Bob – retired with no choice from the assembly line – and  Fran – still nursing to avoid “hitting Bob with the back of a shovel” – show their age, now in their sixties, but with no hint of cliché.

In particular, the circumstances and the decisions their children make require subtle differences in Pip’s, Mark’s and Ben’s physical appearance, which you only notice as you begin to understand the changes in their relationships with their parents, their partners and others (off-stage) and with Rosie.

Rosie remains a figure who draws your attention throughout, even when she is quite peripheral to episodes of dramatic action between others in her family – dressed exactly at the point of change between the teenage girl she was not long ago and the adult self-determining woman she will soon be.  Tilda Cobham-Hervey inhabits the image perfectly.

Though characters in this drama deceive each other, and yet create a remarkable illusion of reality, we know we can trust this author and these directors, designers and actors to reveal Things We Know To Be True.  Not to be missed.