WITNESS FOR THE PROSECUTION 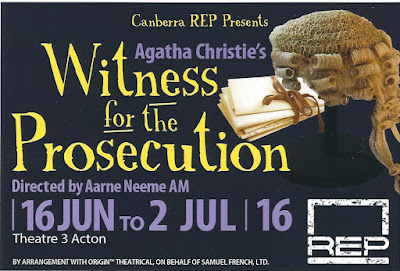 In Canberra Rep’s new production of Agatha Christie’s ‘Witness For The Prosecution', fog plays a major part in the atmosphere of the show and in guessing the murderer, you’ll find you haven’t the foggiest idea.

‘Witness For The Prosecution’ was a huge success in London in 1953 and was made into a popular movie in 1957.  Aarne Neeme’s production is particularly strong on depth of character from the performers, making this a very engaging, well-paced show.

Pat Gallagher gives a terrific performance as Sir Wilfrid Robarts, QC.  Emma Wood, as the witness for the prosecution in the show’s title, gives us a fascinatingly cold as ice character with a surprising humanity under the surface.  As the malevolent Scottish housekeeper, Alice Ferguson’s performance is a sheer delight.  Cole Hilder displays a winning naivety and charm as the accused murderer and there is particularly good character work from Jerry Hearn, Ian Hart, David Bennett, Peter Holland, Saban Lloyd Berrell and the rest of the cast.

The set design by Quentin Mitchell is superb.  The show has to alternate between the lawyer’s chambers and The Old Bailey Criminal Courtroom.  The staging of the third act scene change in full view of the audience was so cleverly and efficiently done that it drew a deserved round of applause.

The early 1950s costumes designed by Helen Drum are very well done and lighting by Cynthia Jolley-Rogers added a fine atmosphere to the set, especially in the first scene of the third act.

Agatha Christie herself stated that ‘Witness For The Prosecution’ was her favourite work for the stage.  You can see why in Canberra Rep’s excellent production.

This review was first published in the Canberra City News digital edition 18 June 2016.  Len Power's reviews can also be heard on Artsound FM 92.7's 'Artcetera' program on Saturdays from 9am.
Posted by Canberra Critics Circle at 9:45 AM