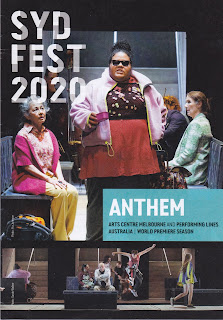 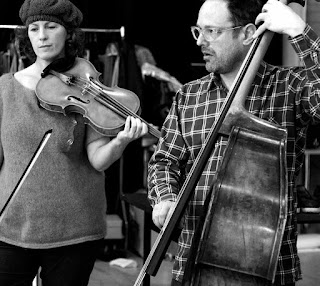 Anthem consists of five scenes with linked characters, bookended by two, unknown to each other, on their way to the airport when a political protest holds up their train.  They are in France.  He is apparently Black African Middle-class returning to Melbourne, of working class origin but now educated and successful in business.  His views are centre right conservative. Brexit for him is about economics and Britain’s trading position. She is  apparently White Middle-class, with centre-left small-L liberal views.  Brexit for her is about racism and anti-immigration attitudes to which she strongly objects – on the way accusing him of racism.

They discuss – argue about – current issues before fading above the mainstage action, largely on Melbourne suburban trains, with one at a 7-Eleven store and another in a company office (not 7-Eleven nor Chemist Warehouse).  The five scenes run for two hours (with a 20 minute interval), until Ruci Kaisila as an Aboriginal beggar who has observed and sung at significant points (did I hear “We are One, We Are Australian”?  I certainly heard “I still call Australia home”), sings the anthem, "Amazing Grace".

At this point, the two waiting on their train in France reappear, in a flashback, without having reached any clear political consensus, and are pleased that their train begins to move again.

But is Australia’s train going anywhere?

The black man returning from education in France turns out to be the youngest of four siblings, who resent his having left them behind in poverty.  Among the others appears to be a young unmarried/divorced mother with a six-year old son who bangs his head against the doors on a train when he is being taken by court order to stay with his violent father.  His mother is a “rough white Aussie” who believes the country “belongs to us”, but can also understand Greek, when a Greek couple complain to each other about the woman’s behaviour.  Remember when Melbourne was known as the largest Greek city outside Greece itself?

One of her brothers appears to be of “Middle-Eastern appearance” and takes a relatively benign approach.  But the last brother, seemingly white Irish-Anglo Australian, surely would have used his bounding aggro energy violently in the Cronulla riots if he had not been a Melbournian from the outer suburban fringe instead.

Interestingly, since the Sydney Theatre Company will soon be presenting Dario Fo’s “No Pay, No Way”, the thread running through Anthem is about workers not being paid (and trying to use a starting gun to threaten to kill to get the money they are owed); beggars asking for money without success, and even refusing (and being told by others to refuse) to take money which is not genuinely offered; and a middle-class woman left homeless (by a husband taking a new young wife) trying to sponge off her previous Asian cleaning woman who was never properly paid.

The black son of the family (presumably with diverse parents) offers $30,000 to his siblings, which his sister is inclined to accept until his violent Aussie, Aussie, Aussie brother forces the educated successful black brother out of the proudly poor family who refuse to accept charity.

For the older generation like me, who still remember the Sydney Communist New Theatre production of The Good Soldier Schweik, it’s good to see true agit prop theatre again.  Unfortunately I missed the Melbourne Workers Theatre’s Who’s Afraid of the Working Class? 20 years ago, when these five writers had first been brought together, then under director Julian Meyrick (whose Platform Paper “The Retreat of our National Drama” was reviewed on this blog May 15, 2014).

The style of presentation of Anthem is true expressionist agit prop – that is ‘agitation propaganda’.  Moveable rostra are shifted around to represent being on a train or street or office – no naturalism here.  The musicians play on stage, in amongst the action.  The action and spoken word is upfront – forthright in the extreme.  The lighting is full on and or full off.  The character of the Aboriginal beggar is directly out of the tradition of the Narrator in The Threepenny Opera who sings “Mack the Knife”.

But Anthem is perhaps even more bleak than the ending of The Threepenny Opera, when the Narrator sings (Hugh MacDiarmid translation):

Now we’ve got our happy ending
Everything is on the mend
Yes, the man with lots of money
He can buy a happy end!

There are some men live in darkness
While the rest have light for free
You can spot those in the limelight
Those in darkness you don’t see.

How ironic is it that an Aboriginal sings Amazing Grace as the ethnically (non-Indigenous) mixed Australian family tears down the Australian flag (which still includes the Union Jack – perhaps for not much longer) in a state of political frustration?

What train are we on?  Let alone where is it going?  This is a thinking person’s theatre show which should not be missed (especially by those who need to see it most).