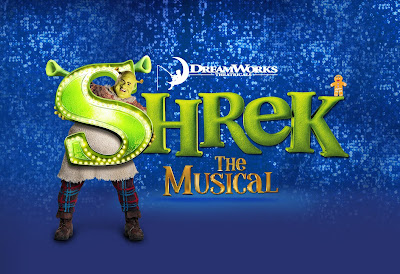 The story of how a lonely green ogre and a beautiful fairy-tale princess find true love through mutual flatulence forms the basis of this delightfully silly musical.

Adapted from the popular DreamWorks animated film, which itself was based on a book by William Steig, “SHREK  The Musical”, traces the travails of a lonely ogre, Shrek, (Ben Mingay) who discovers that his swamp has suddenly been occupied by an assortment of  recognisable  fairy-tale  characters who’ve been banished by the evil, short-statured, Lord Farquaad (Todd McKenney). Farquaad’s planning to marry Princess Fiona, (Lucy Durack) currently imprisoned in a tower guarded by a fearsome dragon (Marcia Hines).

Anxious to regain his swamp, and his privacy, Shrek decides to visit Farquaad and demand his swamp back. Along the way he rescues a donkey (Nat Jobe) who takes it on himself to accompany Shrek on his journey.

Farquaad agrees to return the swamp to Shrek on the proviso that Shrek rescues Princess Fiona from the tower, and return her to him. You don’t need a spoiler alert to guess that Shrek and Fiona discover their mutual attraction but you’ll have to see the show yourself if you want to know how they overcome the complications which arise.

David Lindsay-Abaire’s book and lyrics are witty, and it’s fun to follow the back stories of the various fairy-tale characters portrayed by the talented and hardworking ensemble. Jeanine Tesori’s score is catchy, with spectacular picture-book settings  and costumes, along with  some magical puppets including a magnificent dragon, a talking ginger-bread man, and a loveable scurry of tap-dancing rats, all designed by Tim Hatley.

Jason Moore and Rob Ashford’s direction, meticulously reproduced here by Jenny Sawyer, embellished with snappy and impeccably danced choreography by Josh Prince, replete with witty Broadway references, and a superb band under the direction of David Skelton, allows “SHREK The musical” to bubble along with enough surprises, both visual and verbal, to keep the littlies and their minders captivated until the very end.
But there’s more. This production is blessed with a top-line cast who manage to find the humanity, as well as the humour, in roles which could so easily have simply been pantomime characters, so that the underlying messages of inclusiveness, and being satisfied with who you are, are allowed to land gently.

Despite his cumbersome fat suit and thick green latex make-up , Ben Mingay delights with his lovable, if occasionally churlish, Shrek. His confident acting, thoughtful phrasing and distinctive, soaring baritone ensure that each of his songs is a joy to listen to.

Also no slouch in the vocal department, Lucy Durack revels in the opportunities provided by her role as the feisty Princess Fiona to exercise her considerable comedic talents. Her interactions with Mingay are delightful, particularly in the farting scene, which on opening night reduced several small boys in the audience to helpless giggles.

Nat Jobe captured just the right level of sassiness to make his donkey both funny and loveable, Marcia Hines, as the dragon, raises the roof with her stunning off-stage rendition of “Forever”, then returning for the finale, this time in full view and spectacularly costumed, to lift the audience out of their seats with the red-hot interpretation of the best song in the show, “I’m a Believer”.

But perhaps best of all is Todd McKenney, demonstrating his genuine star quality, playing his entire role on his knees, while chewing up the scenery, to create an unforgettable Lord Farquaad, surely one of the funniest, most bizarre and memorable musical theatre villains you’re ever likely to come across.