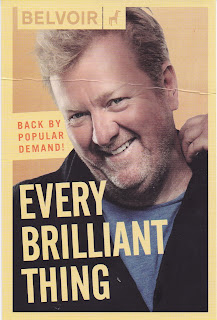 The ethics of reviewing require the disclosure of potential bias.  The travel writer reveals the company that paid for their travel and accommodation at the holiday destination.  In my case, I have reviewed Steve Rodgers’s work as writer, director or performer a number of times (on this blog) with the note that he was once a student of mine.

The standing ovation he received last night at Belvoir for his solo performance as Narrator, and as co-director with Kate Champion, of Every Brilliant Thing requires me to explain in more detail why I was affected by the nature of this play, and by Steve Rodger’s interpretation of it, in a particular way, the same but different from other audience members.

I went to see the play cold.  That is, I had not been aware of its performance history, including the nomination of Jonny Donahue for several awards following his five months’ showing off-Broadway, also screened as an HBO World of Wonder Special.  My travel plans last year meant I missed the opportunity to see Kate Mulvaney’s performance; nor was I aware that Kate Champion and Steve Rodgers were the directors at that time.  I had not been aware either, of Joyce Morgan’s review in the Sydney Morning Herald (March 17, 2019), nor of any other reviews or commentary.  I had not known that a few clicks into Youtube would show me different stage designs, different actors in the Narrator role on stage and in rehearsal; even interviews with the author and company directors.

I knew nothing, except that Belvoir advertised this return season, with a smiling photo of Steve Rodgers, as “BACK BY POPULAR DEMAND!” – and not even did I know anything about the content of the play, imagining it to have some reference, perhaps, to My Brilliant Career!

So I was surprised to be greeted warmly, with a huge hug, by one-time student Steve on the stairs to Belvoir Upstairs, who gave me and my wife a slip of paper numbered 717.  “When you hear me say seven hundred and seventeen, you must read out loud what it says,” he told us.  It read “Nina Simones Voice” (without the apostrophe, the old teacher in me noticed).

“I am reviewing,” I told him.  “Well, then I’d better be good!” he replied, as he moved on and we entered the auditorium to find our seats, kindly provided by Kabuku Public Relations at the usual Row E 25/26.  But instead of the usual centrally-situated view of the acting space taking up the corner of the old tomato sauce factory floor, on the far side was a complete reproduction of the seating on our side.  Theatre completely in-the-round – as I had seen at Belvoir only once before, for Life of Galileo last year (reviewed here August 10, 2019).


Then what happened stunned me.  I watched my student Steve doing what I had taught him to do in the Drama Room at Hawker College back in 1987.  Suddenly my reviewer’s mortar board hat was perched precariously on my drama teacher’s skin, now even more bald, but still firmly attached.  To review is to write about drama; to teach and learn drama is to simply “Do It” – as one educational drama professional association had named their journal in the 1970s.

Over their two-year course in Years 11/12, I had not run theatre skills training classes, not academic literary or theatre history studies, or even staging theatre productions as my central approach.  Taking up from English educational drama traditions for younger students, particularly of Dorothy Heathcote and Brian Way, and combining those with my experiences, particularly in Sydney with Margaret Barr and Richard Wherrett and strongly influenced by Rex Cramphorn, I focussed my teaching on participation and learning leadership through whole group improvisation.

Classes contained students, mixing those in Year 11 and Year 12, at anywhere from Unit 1 to Unit 6 level of experience.  The basic method was for me, or for a student, or for a small group, to provide a point of stimulation to begin a “workshop”.  This could be as simple as having a person stand in a spotlight.  Others might respond by asking that person a question.  Bit by bit as they answer, that person and everyone in the class find themselves creating roles which determine action, and a drama results.

Among my favourites was one which turned out to be an upperclass garden party, in which I became the silent garden gnome, thoroughly soaked when someone turned the watering system on as a lark, and finally being “accidentally” knocked over.  I was able surruptitiously to escape by unobtrusively rolling into the non-acting space behind the drama room’s surrounding black curtains.

The principal stimulating device in Belvoir’s Every Brilliant Thing was more sophisticated but still very simple: Steve Rodgers (in my terms as last night’s workshop leader) meeting and greeting participants on the stairway, giving some of them mysterious cards with numbers and words to say, coming in with everyone, explaining their tasks to some people with cards – and then, after walking around a little in the central acting space, just quietly standing still (without even a spotlight), looking thoughtful, perhaps a bit worried, until everyone has realised he is there and gone quiet.

Steve learned to do this in Year 12, became a leader in whole-group improvisations which could often become intense dramas (and played a very humorous God Hephaistos in a student written, directed and managed production), before attending my Audition Training extra-curricular class and attaining a place as today’s program records at Theatre Nepean at Western Sydney University.

And then what was so brilliant for me, perhaps even more than for the upstanding, cheering audience at the end of the one millionth Every Brilliant Thing, was how wonderfully well Steve Rodgers melded the written script with his selection of audience members, shifting so easily in and out of his role as the son of a woman who killed herself “in a masculine way” and his role as improvisation workshop leader.

The result is, as Duncan Macmillan clearly hoped for his play, an educational drama of the very best quality.  [  https://www.youtube.com/watch?v=yEbv1bGZhX0  ]

The humbling thing for me was to see a student so overwhelmingly surpass his teacher in such a magnificent performance – my personal millionth and one Brilliant Thing.