THE AUSTRALIAN MUSICAL FROM THE BEGINNING 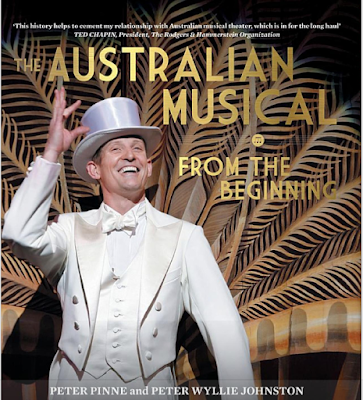 When we think of ‘Australian Musicals’ the ones that come to mind immediately are ‘The Boy From Oz’, ‘Priscilla Queen Of The Desert’ and ‘Muriel’s Wedding’.  These commercially successful and fairly recent shows are just the tip of the iceberg.  Australians have been writing musicals with differing degrees of success ever since the beginning of the 20th century.

The new book, ‘The Australian Musical From The Beginning’, details the history of musicals writing in this country.  It’s a fascinating, if not always happy story.

‘The Bunyip’ by Ella Airlie with music by Herbert de Pinna became the first hit Australian musical when it opened in Melbourne in 1916 and then repeated its success around Australia and in New Zealand.

Most Australian composers of musicals were frustrated by the lack of interest from commercial theatre managements like J. C. Williamson’s who concentrated on producing imported American and English musicals.  One exception was F. W. Thring, a film producer who, in the early 1930s, became a serious stage rival to Williamson’s.  His support and encouragement resulted in a fresh wave of successful Australian musicals including ‘Collitt’s Inn’, ‘Blue Mountain Melody’ and ‘The Cedar Tree’.

Unfortunately Thring died suddenly in 1936 and while Australian musicals continued to be written, very few received a commercially-mounted production.  One exception proved to be the highly successful ‘The Sentimental Bloke’ in 1961.

Eventually the 1990s saw the commercial successes of ‘Bran Nue Dae’, ‘Hot Shoe Shuffle’, ‘The Boy From Oz’ and ‘Priscilla, Queen of the Desert’.  Apart from a handful of successful shows, hundreds of musicals were written over the years and disappeared quickly after their initial season.  Having your musical staged in Australia by a commercial management still remains an elusive dream for most Australian composers.

The book’s authors, Peter Pinne and Peter Wyllie Johnston, have produced a fine book in which the enthusiasm of Australian composers shines brightly in the face of adversity.

The first half of the book details the chronological development of the Australian musical.  Its accessible style makes it compelling reading and the numerous photographs illustrate the colourful journey through the years.  The second half of the book is an A to Z Index of hundreds of musicals, complete with synopses, production details, cast lists, titles of songs and many photographs.

This attractive and unique publication should prove to be the Bible on Australian musicals for years to come.

Posted by Canberra Critics Circle at 9:41 AM