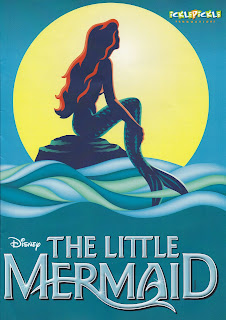 When you go to see The Little Mermaid, make sure you pack your sense of humour.  Jordan Best and her team’s design and direction have set the tone exactly right.  Everyone on stage – and I think there were 40! – understood and thoroughly enjoyed the fun side of such an unlikely seaside story.  Don’t miss, for example, the array of complex characters among the wonderfully sweet-singing but terribly bitchy Mersisters.

Turning a cartoon, essentially made for very young children – almost at Sesame Street age level – into a stage show suited for 10-year-olds and up, is a risky venture.  As a movie, the close-ups of the character’s faces – especially, say, of the way Ariel’s eyes can take over the whole screen – or the way the moving image of life under the sea can be fascinating to watch just for its colour and variety, Disney’s The Little Mermaid is an attractive fairy-story fantasy.  We get the point of the story, but it presents a ‘lite’ version.

Ickle Pickle give us the grown-up version in which the Ariel’s teenage need to escape her royal father’s assumption – that he must control her life to protect his daughter – becomes a serious theme, even if it means she must accept the risks of becoming her own woman.  Emily Pogson successfully makes Ariel’s constricted life as a princess believable.  The risk for Jordan Best here is that the movie’s light quality (which is what makes it such a longstanding favourite) could become too dark and heavy.  (I almost began to think, when Samuel Dietz’s character Grimsby announces at the end “After all, I do believe in royalty”, of Prince Harry and his love for Meghan.)

The great success of Best’s directing is to find the right spot, where the characters are played with a clear sense of not taking themselves too seriously – in fact the whole production in its stage design, lighting effects, humorous choreography, costuming and makeup, and often arch singing, play with the truth that theatre is just an illusion.

And to bring this all together on such a small stage with such a large group of so many young performers (but not forgetting the adults, Michael Jordan playing King Triton and especially Janie Lawson playing Ursula as almost a spoof of Shakespeare's Oberon and Titania) is a logistical and artistic achievement in its own right.