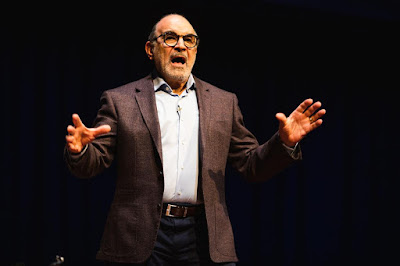 Although he is best known for his portrayal of Agatha Christie’s elegant Belgian detective Hercule Poirot, a role he has played for 25 years, David Suchet is a much celebrated actor, having garnered numerous awards and nominations over a 50 year career on stage, in film and television.

His show, “David Suchet Poirot and More A Retrospective” is part interview, part memoir and part master-class, and an absolute “must see” for anyone with even a passing interest in the act of acting.
The performance commences with a chatty interview conducted by journalist, Jane Hutcheon, herself well-known for her own long-running ABC series “One Plus One”, and with both seated comfortably beside a large video screen that ensures that even those towards the back of the theatre have an excellent view.

During this interview, Hutcheon explores Suchet’s path to his career in theatre. He confides that his first role was as an oyster in a school production of “Alice Through The Looking Glass”, (and shows the photo to prove it ), that he was sent to boarding school at age 8, and that his grandmother was a sand dancer.

It’s quickly obvious that Suchet is a consummate raconteur, has a delightful sense of humour, an engaging command of language, and prone to jumping out of his chair to demonstrate a detail, like the art of sand dancing, for instance. He’s also not averse to flirting with his audience, or his interviewer.

He happily shares engaging anecdotes about his numerous stage, film and television roles, among them, Sigmund Freud, Robert Maxwell, Salvador Dali, Lady Bracknell and Blot, in “Blot on the Landscape”. He reminds the audience that he had played Inspector Japp to Peter Ustinov’s Hercule Poirot in the film “Thirteen at Dinner”.

He tells how he came to be cast as Poirot, and explains his process for developing Poirot’s signature characteristics, the accent and the walk - this latter probably not to be tried at home. His show ‘n tell items include the famous cane which he used in every episode, and the extensive list of character notes he prepared to guide his interpretation.

The second half commenced with Suchet alone on stage, back to the audience, dramatically lit in a single spotlight. He turned slowly towards the audience to give a mesmerising performance of Salieri’s monologue from “Amadeus”. This version, he confided, was the version Peter Shaffer rewrote at Suchet’s suggestion, and which he performed at Shaffer’s memorial service.

Launching into an explanation of his fascination with words and voice, Suchet then offered a mini master class on acting Shakespeare. He explained mysteries like the voice print, and the iambic pentameter, then demonstrated their use with enthralling short excerpts from his acclaimed performances as Shylock, Oberon and Tybalt, as well as from his performance as Cardinal Bennelli in “the Last Confession”, relying on his voice and expression alone to vividly create each character.

Jane Hutcheon re-joined him to refocus attention on Hercule Poirot, which Suchet gracefully acknowledged was the reason that he and the audience were enjoying each other’s company at that performance. It may have been Poirot who attracted the audience to the theatre, but it was the accomplished mastery of his art, demonstrated with such grace and finesse by Suchet, that few who witnessed his performance will forget.