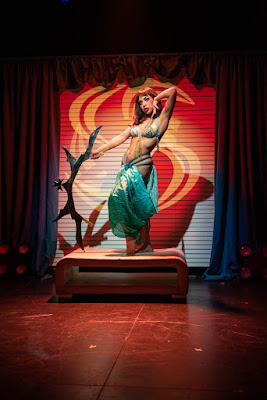 Canberra burlesque artist, Rachel Reid, who performs professionally as Jazida, has the distinction of being the first Government funded  burlesque performer to have been awarded grant funding by the ACT Government to develop her show.

An obviously accomplished burlesque performer, her toolbox includes a repertoire of stylish routines, a wardrobe of spectacular costumes and wigs, and in addition to her dancing, singing and acting skills, she’s a dab hand at conjuring and gymnastics. Her makeup is a work of art in itself.

However, as is the tradition with burlesque, each of her routines is a complete performance in itself, and her intricate costumes require even more time to get into, than they take to get out of.  “Catch Jazida” is an imaginative attempt to devise a full-length showcase for her skills, that doesn’t require a large supporting cast.

The concept for “Catch Jazida” is a tongue-in-cheek parody in which the story-line follows a film noir style narrative in which Jazida portrays a thief on the loose who’s been accused of stealing a large sum of money. She’s pursued throughout by a private detective,(Morgan Heath-Williams, who works professionally as Artemis Seven), who provides an amusing linking narration between routines, clears away strewn costume components, and at the end of the show performs a gymnastic duet with Jazida, leading to the final denouement.

Along the way, Jazida performs a series of striking striptease routines, among them, a spectacular fan-dance with feather fans decorated with LED lights, a Mae West routine in which she riffs on about various alcoholic drinks, a circus routine, and most memorably, an oriental routine involving dangerous looking shiny metal blades.
However, as inventive as the various routines are, each has its own inevitable conclusion, and seen in succession, tend to become repetitive. As well, the relationship between the routines, the narration and filmed sequences, is often puzzling. All of which, together with the makeshift setting, missed sound and lighting cues, and untidy exits and entrances, stamps “Catch Jazida” as a work in progress, and certainly one which would benefit from the services of an experienced director.

Never the less it should be noted that the supportive first night audience found almost every utterance cause for loud guffaws and rewarded the performance with a standing ovation.

Following its short Canberra season, “Catch Jazida” is already booked for seasons in Adelaide and Perth, so if this sounds like your sort of show, then don’t miss this opportunity to “Catch Jazida”.

This review first published in the digital edition of City News on 16.01.20
Posted by Canberra Critics Circle at 2:47 PM