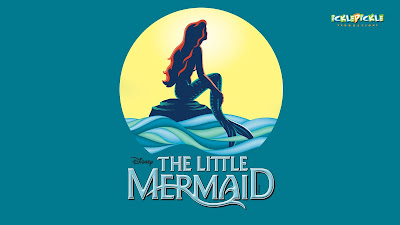 Based on the Hans Christian Anderson story and the animated 1989 Disney movie, ‘The Little Mermaid’ tells the story of Ariel, a mermaid who dreams of the world above the waves and gives up her voice for the love of a handsome human.

Director, Jordan Best, has given the show a fine staging full of colour and movement.  It moves at a fast pace with good performances and strong production values.  Her staging of the storm sequence was especially well done.

The set design by Ian Croker cleverly evokes this crazy undersea world.  Fiona Leach has designed a dazzling array of colourful and sparkling costumes for the myriad of sea creatures and the lighting by Sidestage Productions gives the show a fine aquatic atmosphere.  Makeup designs by Eryn Marshall were quirky and effective.

There were some strong performances amongst the large cast.  Emily Pogson’s performance in the central role of Ariel the mermaid was nicely detailed and she sang very well, especially the memorable ‘Part Of Your World’.

Meaghan Stewart excelled as the crab, Sebastian, leading the big song from the show, ‘Under The Sea’ with gusto and an infectious sense of fun.  Janie Lawson gave a delicious performance as the evil Ursula and led the song, ‘Daddy’s Little Angel’ superbly.

There were too many in the strong cast to mention individually but Jack Morton as the seagull, Scuttle, Michael Jordan as King Triton, Joss Kent as Chef Louis and Jade Breen as Flounder all gave notable performances.

There was also fine work by the six Mersisters.  Their ensemble singing was assured and each performer presented an attractive individual character.

The choreography by Jodi Hammond suited the underwater theme of the show very well and the cast performed the dances with confidence and enthusiasm.  There were some well-trained dancers in the cast who featured strongly in ‘Under the Sea’ and especially in the tap routine for ‘Positoovity’.

There was strong vocal work by the company and the balance between voices and the pre-recorded music was just right.

This is a good production of the Disney show that will please both adults and children.

Posted by Canberra Critics Circle at 9:22 AM