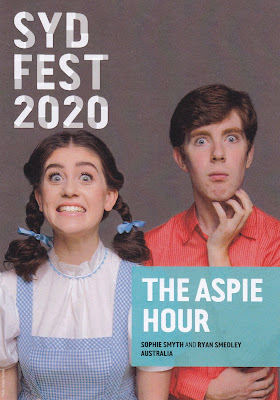 The Aspie Hour.  Created, written and performed by Sophie Smyth and Ryan Smedley.

What on earth is an Aspie?  If you’re on the spectrum, you may be thinking is this what normal people call a joke, until Sophie explains that it’s a short-cut word for a person who has Asperger’s Syndrome.

Fortunately I have known someone with Asperger’s over many years.  He would probably not think being called an Aspie was funny.  It’s no joke when you don’t understand how to initiate a conversation, say.  Or realise that what someone said was meant to be a joke, or it was an innuendo and actually meant something quite different from what the words said.  My friend’s an expert computer programmer.

Sophie explained, for example, that “come up and have a cup of tea” means “sex”.

The Aspie Hour is a very pleasant entertainment.  Because they each have an obsession with musicals, but not the same sort of musicals, they demonstrate their tendency to concentrate on informative details and a strictly logical approach by performing songs from an enormously wide range of musicals, mainly with their own words.

Ryan prefaces his song and dance routines with proof of his factual knowledge by having members of the audience call out a year date, like 1955, 1984 and three others last night.  He immediately tells us which musical that year was the most popular, or which in his view was the best, even though his choice may not have won awards.  And I am sure that he knew his facts.

His songs tell the story of a visit to New York, the source of more musicals than anywhere else in the world (he claims).  The essence of his song and dance act is about what he had to learn about social contacts in order to travel by himself to achieve his dream – to see a musical each night for 20 nights and meet famous musical performers.  And, I guess from his show, he learnt song and dance skills from his obervations.

Sophie took a different line, focussed on the elements of what makes up a musical, from the intro dance number, through the I want solo to the grand finale, which has nothing much to do with the rest of the plot.  She explained what we needed to know about each element before she sang, perfectly in style, each type of number.

For me, Sophie gets a special award for “Over the Rainbow”: “If little blue birds can fly, fly over the rainbow, why, then oh why, can’t I?”  This was a moment of tender appreciation by us all, through quiet tears for an Aspie’s frustration and at the same time recognition in the strength and quality of her performance that indeed, she can fly over her rainbow.

As they have written, “The purpose of this show is to relate ourselves to the audience, asking ‘have you had an experience like this?  We’re not all that different.”  How true, and how enjoyable.