DANNY THE CHAMPION OF THE WORLD 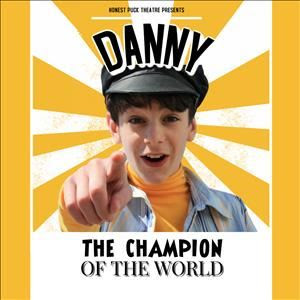 Roald Dahl’s stories for children have now become well-known through movie and musical versions of “Charlie and the Chocolate Factory”, “Matilda” and “James and the Giant Peach”.  As well as being great adventure yarns, each of these stories have a characteristic dark side and “Danny The Champion Of The World” is no exception.

In this 1975 story, adapted for the stage by David Wood, young Danny and his father live in an old caravan next to a service station, fixing cars for a living.  Danny’s father also poaches pheasants from the woods owned by wealthy neighbour, Mr Hazel.  After injuring his leg in a man-trap set by the neighbour while out poaching, Danny’s father, with his son’s help, plot to spoil the neighbour’s annual pheasant shoot.
This story focusses on the loving bond between father and son and doesn’t rely on any magical or supernatural elements.  Its simplicity is one of its strengths, allowing us to empathise with the pair in a very real way as the story plays out.

The first half of the show is a bit too leisurely in its development of characters and storyline but the second half of the show explodes into action with plenty of comedy and audience participation.  The young children in the audience were captivated and entertained and Dahl’s dark humour made it very amusing for adults as well.
Directed by James Scott, who also plays the father, the show is performed on a simple but practical set by a cast of nine, including two puppeteers.  Three of the cast play multiple roles.

There was good work by others in the cast especially the nicely judged almost Dickensian performance of David Cain playing the villainous Mr Hazel.  Brendan Kelly as the policeman, Sergeant Samways, and Katherine Berry as Rabbets gave vivid performances that were also delightfully mannered.

This is a good school holiday show for children over the age of seven.  Adults will have a good time with it as well.

Len Power’s reviews are also broadcast on the Artsound FM 92.7 ‘In the Foyer’ program on Mondays and Wednesdays at 3.30pm.
Posted by Canberra Critics Circle at 7:08 PM