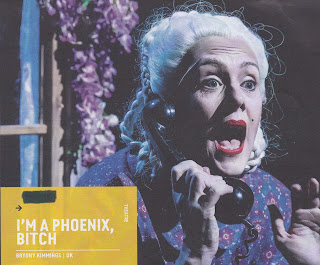 “Performing on stage is always a risk (break a leg!), but the greatest risk – to your sanity, if not in failing your audience – is to turn your own life into a public performance, and then perform it yourself.”  In quite recent times I have coined the term “Personal Theatre” for this kind of work.

Two especially powerful pieces were RED by Liz Lea  (reviewed here March 9, 2018), a dance work expressing her pain and determination to keep performing while suffering ever-continuing endometriosis; and Ghenoa Gela’s experience of shock in finding her personal salvation in re-connecting with her traditional culture through dance on her first visit to her mother’s home island Erub in the Torres Strait, after being born and brought up in Rockhampton.  My Urrwai is reviewed here January 21, 2018.

Based on dance with some story-telling, these were demanding and impressive works, though relatively straightforward theatrically.  I’m a Phoenix, Bitch is centred on Bryony Kimmings’ experience of her psychosis arising from the sudden onset in her baby son of ‘Infantile Spasms’, seemingly life threatening: the beginning of epilepsy.

Her creating this work for performance arises from the principle of cognitive behavioural therapy – that is, learning to objectify frightening mental experiences and recognise reality through the process of telling others.  So I’m a Phoenix, Bitch begins rather as if Bryony is a stand-up comedian setting up a relationship directly with us, her audience, through humour, about sex, marriage and childbirth.

But as her child is in hospital and her husband has moved out, she finds herself left alone in what was meant to be the ideal little family cottage on an isolated hilltop in the country – fearing for her child’s life.  Her experience is expressed on stage in acting and singing, in a complex set design using live and recorded video, a model of the house, a representation of the hill and the flooded stream that prevents her from obtaining help, with sound miked so that her inner voice sounds male threatening her female self, and a surround soundscape creating her emotions in us as we watch her despair.

The real life experience took place over a two year period, which Bryony structured to make this work in 2018 after a highly successful career following a degree in Modern Drama from Brunel University in 2003, creating multi-platform art works.
[  https://en.wikipedia.org/wiki/Bryony_Kimmings  ]

In the title she becomes a phoenix in the sense that she learns that even the worst that can happen is just bad luck, and that we must not feel guilty for what, in reality, we cannot control.  As she finally drives away from the house – now rented by another family and no longer haunting Bryony – she tells us

“And I watched the cottage disappear out of sight in my rear-view mirror.  And for a moment I felt like I was in a film.  But then I stopped doing that.  Because I wasn’t.  This was real fucking life.”

Black out.
And to tremendous applause and a great sense of relief, Bryony takes a bow and takes us back to something like the comedian she had appeared to be at first.  But we now know, “it’s time to love the new Bryony now.  She has sharper edges, she laughs a little less, she is scarred.  But she is who you will need in the next flood.”

I’m a Phoenix, Bitch is an important work of art because it is a story of real experience which becomes a meaningful metaphor for us each to interpret in our own lives.  Though more complex in the form of its expression, this is what Bryony Kimmings’ work has in common with those other works of “Personal Theatre” by Ghenoa Gela and Liz Lea.  They take the risk which is theatre; they succeed through genuine art.

And I note that these works are by women.