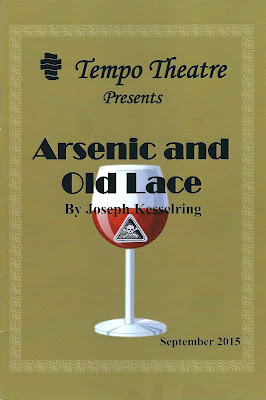 Review by Len Power 5 September 2015
‘Arsenic and Old Lace’ was written in 1939 and is a black farcical comedy that still works for audiences today, as Tempo Theatre showed in their new production at the Belconnen Theatre.

Two spinster sisters are murdering lonely old men by poisoning them with a glass of home-made elderberry wine laced with arsenic, strychnine, and "just a pinch" of cyanide.  Their nephew naturally worries about the impact this might have on his impending marriage.

The play contains a lot of topical references from the era in which it was written which go over an audience’s head today but it doesn’t matter.  One of the best jokes in the original production was the description of a character as looking like Boris Karloff of ‘Frankenstein’ fame.  The role was played on Broadway by Boris Karloff!

Every member of the cast did very well but it’s the quirkier characters who stand out in this play.  There was impressive work from Jon Elphick as the demented Teddy Brewster who thinks he’s the President, Teddy Roosevelt, Kim Wilson as the stressed Lieutenant Rooney, Bill Kolentsis - especially delightful - as the mad Doctor Einstein, Michael Effron as the wonderfully boring and demanding Officer O’Hara and Jason Morton who did a great Boris Karloff, given that Mr Karloff seemed to be unavailable.

The more ‘normal’ characters included Sam Kentish in a nicely controlled performance as the harassed nephew, Mortimer Brewster, and the very pretty and accomplished Angela Edwards as his headstrong bride-to-be, Elaine Harper.  Lynne Seaman and Marian Fitzgerald gave nicely understated performances as the two murderous old ladies that you would never suspect of any crime.  In the smaller roles, Bryn Evans, David Henderson and Alistair Henderson all gave good characterizations.
Jon Elphick has directed the show very well, obtaining strong characterizations from his actors, keeping the pace fast and furious and giving full weight to every funny moment in the plot.  His set design works very well and the technical aspects of the show were fine.

Tempo Theatre gives Canberra the opportunity to see classic plays that other companies don’t present these days.  The second night audience I saw it with were clearly having a great time.

Photos by Sarah Bourke
Len Power’s reviews are also broadcast in the ‘Artcetera’ program on Artsound FM 92.7 on Saturdays from 9am.
Posted by Canberra Critics Circle at 10:54 AM