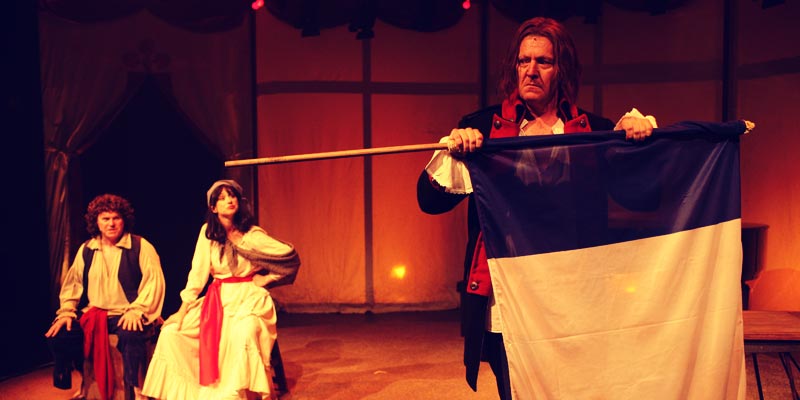 A week is a long time in politics, so the saying goes.  But even a day can be an eternity, especially when your trade is political humour.  On Tuesday night the question before the audience of this year’s Wharf Revue was how well they would adapt their material to the leadership spill that ousted Tony Abbott as Prime Minister only 24 hours before.

The answer is: “extremely well”.  Partly through good planning (this year’s show had a retrospective theme, so contemporary material was less important) and partly through impressive improvisation, the crew delivered a seamless show, even managing to provide a sketch on the previous day’s events.  “Les Liberables” set the leadership tussle between Abbott, Bishop and Turnbull to passionate tunes from Les Mis.  This was in fact Tony Abbott’s only appearance in the show – out of power for a day and already reduced to a footnote.

Whatever jokes about onions had been planned will forever be a mystery to the Canberra audience, but even this brief appearance was spot-on.  The comic highlight of the night was Tony Abbott getting unstuck in his song and blanking on what to say next for the famous 28 seconds.  When he did speak he reminded us, of course, that he had stopped the boats.  As though we could ever forget.  But more subtle and more savage was the appearance of a leather jacket-sporting Malcolm Turnbull, who gave a stirring encomium on his endless personal virtues before wrapping himself up in robes of state and marching offstage with the dignity of a King.

As the theme was a celebration of 15 years of the Wharf Revue, this year’s performance often had the feel of a greatest hits compilation.  The show opened on a wobbly note with a parody of Geoffrey Robertson – hardly timely satire.  But it hit its stride with the first full sketch, a look at the final days of the Howard Government imagined as Hitler fuming in his bunker.  Alexander Downer, Paul Keating, and of course the Kevin and Julia double act all came out of retirement for lengthy sketches.  More recent figures of fun like Jacqui Lambie and Christopher Pyne were given their moment to shine, but the real love was lavished on the great impersonations that dominated previous shows.  Their Paul Keating in particular is always a delight.

This year’s Revue also tilted towards the artistic side, with Julia Gillard’s heritage prompting a remix of Under Milkwood, the QANTAS CEO giving an appropriately Joycean oration, and in the show’s climax a devoted recreation of The Goon Show.  Music also felt more important to the show than in previous years, with not only Les Mis but Phantom of the Opera getting a medley: Rudd Never Dies.  No matter how many times you stab it in the back.


More than previous years this Wharf Revue felt like a labour of love, a reminiscence on past successes.  As recent events have shown, politics marches inexorably on.  Howard, Keating, and Rudd are comic figures not just of their day, but for all time, and this year's Revue takes us down memory lane for welcome reunions with those old friends.  Tony Abbott, on the other hand, they seem only too glad to be done with.
Posted by Canberra Critics Circle at 4:46 PM