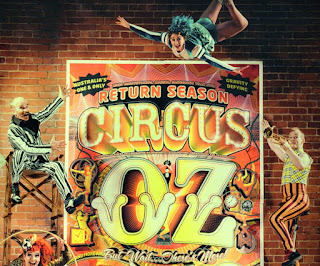 It seems a bit odd to keep calling Circus Oz ‘new circus’ after nearly 40 years.  It’s still different, though, even from any of the other ‘new’ circuses from the French-Canadian Cirque du Soleil to Britain’s Okham’s Razor, and even Australia’s other company, Cirque (with an upside-down ‘i’).

I saw Circus Oz when it was brand new.  What made it different and very popular then, just as it does today in But Wait...There’s More is the combination of having a theme but turning everything into a joke.  Cirque’s recent Le Noir – the Dark Side of Cirque, for example, was a grand display with a theme expressed mainly in costume.  Circus Oz takes up its serious theme, this time of consumerism gone rampant with a parallel concern for Indigenous issues, but with a larrikin absurdist approach.

This is the Australian way, of course: never taking itself too seriously.  It grew, in Circus Oz, from the old tradition of clowns – who were funny because they always got things wrong, such as attempting to walk the high wire and seeming to fall off.  Only later did you realise that to do this was even more skilful than not falling off.  The other thing the old clowns did was to play music, again often out of tune but again showing top musicianship to be deliberately funny.

As I recall the trapeze artist ‘accidentally’ letting go and flying sort-of horizontally until hitting the wall in a spreadeagled splat, and the slightly wild jazz band of the early days, I see that Circus Oz performers are all clowns, and great musicians.  This is their ‘new’ tradition.  And it still works so well because it taps into the best thing about being Australian.

In fact we need Circus Oz even more now, considering our national political history of the last 25 years or so.  Bob Hawke was the last of the larrikin prime ministers, unless you want to see Tony Abbott as a clown on his bike in his budgie smugglers.  Everyone’s a clown in Circus Oz.  They just reflect our society.

Though it’s completely unfair to pick one performer out above any other, since everyone is brilliant in their own way, the consumerism theme is led by a character played by the contortionist Matt Wilson.  He does the acting so well that you won’t believe it when you see him lose an arm and a leg, and finally everything before your very eyes.  And don’t close your eyes for the amazing trapeze sequence, although you’ll want to when you’ve seen the first near miss.  It just gets better and better, until if you’re like me you’ll feel completely exhausted by the end of the show.

Excited and exhausted.  Just as I felt at the end of the great old circuses of my childhood.  If Circus Oz can do that for this ancient septuagenarian, it’s no joke, I can tell you.  Just very very funny, and occasionally scary.  And very very worthwhile. 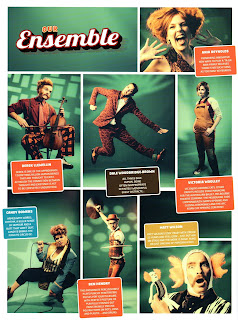 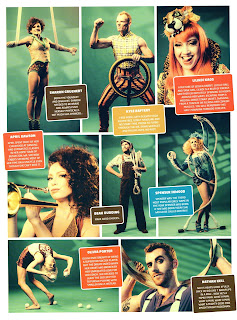