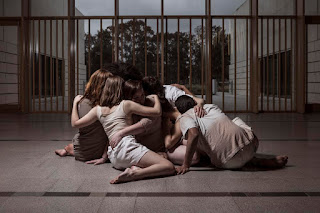 Love the skin you’re in.  Canberra Youth Theatre’s installation at the National Portrait Gallery explores the darker side of body image through movement and poetry in a moving performance that misses an opportunity to explore the more positive aspects of bodies.

The show begins in the foyer of the Portrait Gallery, with the CYT ensemble filing in wearing nothing but their underwear.  They stand to attention behind piles of clothing and begin to dress.  An alarm interrupts them and the group scrambles to switch places, until after a few rounds of frantic manoeuvring they are all dressed in a patchwork of outfits.  They then strip back to their underwear and walk into the exhibition hall of the Gallery, beckoning us to follow them.

SKIN has been designed to work in conjunction with the “Bare: Degrees of Undress” collection of nude portraits.  The performers take over part of the space and through spoken poetry and dance deliver very personal representations of their body image fears.

The setting is novel, but the performances are an uneasy fit with the content of the exhibition.  The nudes in the Bare exhibit are relaxed and blasé about their nakedness, as though it is the natural and honest state of being.  SKIN by contrast is about conflict with the body, with the performers engaging in slow and deliberate movements that suggest weight and struggle.  Only late in the performance, after the actors have worked through their fears and discomforts, does their movement become light and joyful.  After this, the actors disperse into the exhibition.

At that moment I interpreted SKIN as prelude to the exhibition, with the flurry of activity over clothes and the ugliness of bodies acting as a spiritual cleansing to prepare us for a more relaxed and joyful exploration of bodies.  Instead the audience was wrangled into an epilogue where we were addressed by the performers and asked to look directly at them, exploring their discomfort and ours.  This killed the positive vibe that preceded it and I think the performance would have been stronger if it was integrated into the exhibition rather than imposed on it.  SKIN demands our full attention for about an hour and while that is happening we have to put our curiosity about the paintings and photos on hold.

That said, the performing was well-executed and obviously extremely rewarding for the ensemble.  I would have liked to see more exploration of positive side of having a body.  As individuals we are all so intensely interested in our own bodies that it is hard to realise that other people are mostly indifferent to our tummy flab or crow’s feet.  The ensemble are all young and in good shape – when they were telling me how insecure they felt, I kept asking myself how being young and attractive could be such an obstacle to happiness in life.  Everyone feels bad about their bodies sometimes, but that is because we are all a bit delusional about the importance of a limited standard of beauty: the deeper truth is that bodies are actually kind of rad, a point that SKIN indirectly ends up making anyway.
Posted by Canberra Critics Circle at 6:28 PM