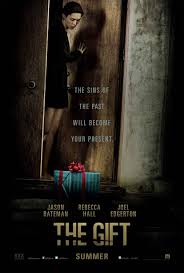 Gifts are not always welcome, nor freely given. The well known subtext to giving and receiving gets a thoroughly sinister workout in this accomplished first feature from Joel Edgerton, one of the many fine Australian actors on screen.

There are interesting dimensions to Edgerton’s creativity. He has writing credits for local features like The Rover, Felony and The Square, and recently put in especially good performances in big international screen events like The Great Gatsby and Exodus: Gods and Kings. Now he shows his talent for directing in this, his first feature.

As both writer and director here, Edgerton knows precisely when and how to turn the screws, and delivers major discomfort to his audience, if sometimes a little over-emphatically. With precision and assurance he has created a psychological thriller that strikes at the heart of coupledom and a tainted professional class.

Set in the leafy hills of LA, a young husband and wife from Chicago, Simon (Jason Bateman) and Robyn (Rebecca Hall), have re-located to the West Coast to make a new life—leaving initially unspecified difficulties behind. Early on they cross paths at the supermarket with a strange character by the name of Gordo (Edgerton).

Their chance encounter is a neatly ironic comment on the impossibility of trying to escape one’s past. Gordo went to high school with Simon, and it eventually transpires that there is much more to it than that.

If Simon isn’t keen on being re-aquainted, Robyn finds it hard to send Gordo away when he turns up at the house announced. Though there is something passive aggressive about the solicitude and surprise visits, and Gordo's face, a mask that barely registers any expression, contributes to a primal sense of unease. The news that he has done two tours of duty doesn't help either. He and his gifts of koi carp for the empty pond, fish food and window cleaner would be welcome, if only he wasn't so creepy, so needy. The asymmetrical 'friendship' is hard to end, though gifts with signature red bows begin to signal an unspecified dread, and the lovely airy open home begins to feel like a type of prison.

The ultimate dark secret revealed in The Gift's denouement would have done Michael Haneke proud. His chilling films like Funny Games and Cache struck at the heart of complacent privilege too. And there were several occasions beside instructions to pay video tapes when I was reminded of Rolf de Heer's Alexandra's Project too.

It’s great to see multi-talented Edgerton starting out with such a strong, assured statement in America, though it's a bit of a pity the project lost its working title along the way. The original title 'Weirdo' would have done more justice to the film's sly complexity.