Ghosts in the Scheme by Scott Rankin 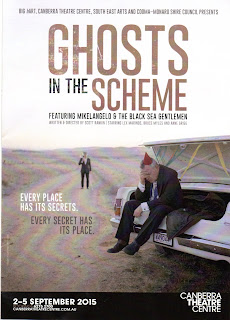 This show is the product of Project Cosmopolitana, the latest work by Big hART “working with the country’s most invisible, silenced or marginalised communities to explore many of the country’s unknown gifts”.  Invited to Cooma, NSW, by South East Arts and Cooma Monaro Shire Council “to embark on a new project working across generations and cultures...[they conducted] a wide range of community workshops including music, dance, oral history and archival research”.

I suspect that the real value of this work remains in the two years of working with the community.  Although the previous two Big hART shows I’ve seen (Ngapartji Ngapartji and Namatjira) produced highly effective theatrical storytelling of great significance to the wider Australian community, Ghosts in the Scheme fails on both counts.

The show is held together only by the quality of the music by the Black Sea Gentlemen, particularly by Pip Branson in a singing role as an occasional commentator on the action.  The script writing is, to put it bluntly, woeful.  The story which is murky for much of the time, gradually turns into a battle between three “old” people, a woman who fell in love when young with a man who she decided was unreliable, and so married his friend whom she never really loved.  In old age, the triangle blew apart.

Unfortunately, for the apparent purpose in writing the play, the Scheme (that is, the Snowy Mountains Scheme) was entirely relegated to background images and occasional difficult to hear voice-overs of bits of stories garnered from oral histories, while the central story could have happened anywhere to any generation.  There is nothing in the script which ties the story of the love triangle specifically to the experiences of the multicultural life of Cooma in the period of the Scheme.  The ‘Ghosts’ of the title were limited to the memories of these three, while what we needed was to get to know what happened to people because of the scheme.

So I’m left hoping that the people in Cooma who took part in the process of this project gained the great deal of satisfaction that they deserve – more than 30 groups and families are listed in the program – but despite our recognition of the musicianship of the Black Sea Gentlemen, theatrically Ghosts in the Scheme doesn’t make the grade.