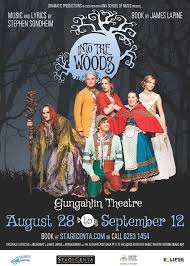 Stephen Sondheim’s brilliant musical exploring beyond the “happily ever after” of favourite fairy tale characters to uncover lives which don’t necessarily have a happy ending, places considerable demands on the actors playing those characters, as well as the audience, because, as with all Sondheim musicals, it demands good vocal technique and excellent enunciation from the actors.

It says much for the success of Richard Block’s impressive production, that most of his cast  meet these demands, with enthusiastic, well delineated characterisations which not only allow the audience to savour Sondheim’s brilliant lyrics, but which capture the humour as well as the darkness inherent in Lapine’s intriguing, convoluted storyline.

Among the strong ensemble cast,  Veronica Thwaites-Brown as the Baker’s Wife,  Sian Harrington as Little Red Riding Hood, Phillipa Murphy as Cinderella, and Alexander Clubb as Cinderella’s Prince who was “bred to be charming, not sincere”,  all give strong performances.  Kelly Roberts is outstanding as The Witch, both before and after her transformation, making every line of her dialogue count, and singing her difficult songs superbly.

Colourful costumes and props, together with an impressive set, courtesy of Victorian Opera, add sheen to the production. Full marks also to musical director, Damien Slingsby, who accomplishes an excellent balance between the singers and orchestra. An added bonus is the opportunity to sample Gungahlin College’s cosy new community theatre.

This review first published in the digital edition of  "CITY NEWS"  on 29th August and in the print edition on 2nd September 2015.
Posted by Canberra Critics Circle at 5:29 PM