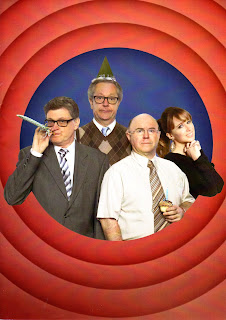 I’ve become so used to the annual Wharf Revue that I felt as though I’ve seen every show, but my reviews go back only to when Julia, despite Kevin’s avowed love for her in the guise of the Phantom of the Opera, stabbed him in the back to make really sure he would never rise again.  That was 2011.

In 2015, this scene was recycled in Celebrating 15 Years.  After a minute’s silence, while apparently slumped dead at the piano, one of Kevin’s hands creepily crept around the side, white against the shiny black surface.  Then the other began to crawl, climbing up off the keyboard and over the top.  “But the Phantom never dies” – we all know what happened, and what resulted in the 2013 election.


And, even more creepy according to your viewpoint, on this very day after the historic Liberal Party Room vote on Monday night, September 14, 2015 – “When the ‘Canberra games’ turned lethal”, to quote a Canberra Times headline (by James Massola and Tom Allard, September 16, 2015), The Wharf Revue team had to add a new ending to their history of theatre and politics.  Malcolm Turnbull has done a Kevin Rudd, with Julie Bishop holding the knife which has left Tony Abbott “dead, buried and cremated”.  Malcolm gloriously swans off, wrapped in the backdrop as if in the Australian flag.

The writing and the performances are as incisive and funny as ever – and as necessary to the Australian cultural scene as David Pope’s cartoons.  In the Canberra Times, (Times Two, September 16: http://www.canberratimes.com.au/photogallery/federal-politics/cartoons/david-pope-20120214-1t3j0.html ) we see Pope’s satirical metaphor: Turnbull, looking like some kind of cockatoo, has stolen Abbott’s traditional ‘budgie-smuggler’ swimmers, leaving the ex-PM fuming naked on the beach, while everything is recorded by the Press in the form of seagulls.  Turnbull, is screeching (as sulphur-crested cockatoos habitually do) “Free at Last! Free at Last!”, but his feet are entangled in the budgie-smugglers, labelled ‘Liberal Right’.  The smile on Turnbull’s face (which has been in every photo opportunity since Monday night’s vote) is already looking rather haunted.  Maybe he is not so free to be a small-l Liberal while still hamstrung by the Tea-Party types of the Liberal Right.

The artistically equivalent scenes in The Wharf Revue which were, I think, the best written, concerned the Chief Executive Officer and Managing Director of Qantas, Irishman Alan Joyce, and Welsh-born one-time Prime Minister Julia Gillard (famous for her ‘misogyny’ speech against then Opposition leader Tony Abbott).

Alan Joyce becomes the writer of Finnegan’s Wake, James Joyce, performed magnificently by Drew Forsythe in an amazing speech about the modern airline industry with all of the twist and turns of Finnegan’s thoughts and language, exaggerated for an even greater comic – and satirical – effect than the original James Joyce achieved.

The Welsh connection turned Julia Gillard’s life into Dylan Thomas’ Under Milk Wood, played almost exactly as the original performance of that play was done on stage at the YMHA Poetry Centre on May 14, 1953.  The actors stood still, as they had then, being just ‘voices’ of all those characters, except that they formed into a quartet for Drew Forsythe to step forward briefly as the Reverend Eli Jenkins – as Dylan Thomas himself had done – and to end in a kind of hymn.  I still have that original recording (Philips B 94022 L / B 94023 L: 2 12inch LP records) and it was a goosebump moment to watch The Wharf Revue team play their wonderful satirical version.

Having now played out their first 15 year history, next year will be even more fascinating to watch, as it will probably be at about the same time as the next Federal election.  What will happen to Malcolm Turnbull and Labor’s Bill Shorten between now and then?

Don’t miss this year (if you don’t make it to Canberra by September 26, you can pick it up at Wharf 1 in Sydney from October 20 to December 19), and look forward to election year 2016 full of excitement.  Just be careful not to fall off the wharf into Sydney harbour as the famous human rights lawyer Geoffrey Robertson appears to do in the introduction to The Wharf Revue, Celebrating 15 Years.