Reserved Seating Only - The Q 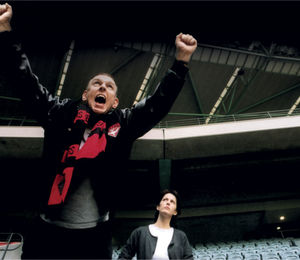 Q. What do divorce and the footy have in common?
A. They're both games of possession.

Reserved Seating Only explores the Australian love of football through the eyes of football widow Trina (Cecelia Specht) who has dumped her footy-obsessed husband and claimed his premium tickets in the settlement. She is thrust into conversation with her former husband's old sports companion Al (David Ross Paterson) and his irrepressible enthusiasm begins to teach her why her ex loved the sport so much.

As someone with zero knowledge of footy (it's that sport with a ball right?) I was worried I would not be able to follow the jokes. True, the specific references lost me, but the core of the play is the comedy of manners between Trina and Al. Trina and Al together are like shaved truffles sprinkled on a meat pie, but despite their differences they start to really like each other, and implausibly stray into something more than liking. Cleverly, Trina is the gateway character for football novices - Al has to explain so much to her that the audience gets filled in along the way.

Al and Trina are played by a real-life husband and wife, and that may be why the play veers so eagerly into romantic territory. But Trina has just left a long relationship with someone football mad, would she so blithely start seeing someone with the exact same problem? I was expecting a grand moment where Trina becomes completely absorbed in the game and understands its heart (and her ex-husband), but instead her journey ends in a cul-de-sac: despite her best effort, she doesn't quite get it. Instead we get a gentle romantic epilogue that feels tacked on and implausible.

Nonetheless, this is an amusing hour of light entertainment. The staging is clever, in particular there are very fun moments where the cast banter with the audience. I had to get up out of my seat at the start of the play as Trina squished past me in the hunt for her exclusive seat (it ended up being on the stage). But for all its laughs it lacks substance. Trina would call this play a bagatelle; Al would dub it a home crowd decision.