'Reminder of free-wheeling times past' - Ricki and the Flash 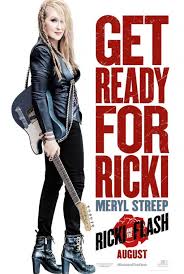 As the mum who didn't show up for her daughter's wedding then arrived in time for the divorce, Ricki Randazzo (Meryl Streep) could expect children to have a few issues with her. When she comes back into their lives, they're all grown up. Can she reach them still?

Back home in Tarzana, California, where she moonlights as lead singer with her band, she has a knack for working a crowd. The patrons at her regular gig are an appreciative lot, cheering on the mix of Springsteen, Stones and Pink. And you have got to hand it to Streep as she prowls the stage and lets rip with a dirty chuckle. She looks and sounds like she's been strapped to a guitar all her life.

Ricki is an endearing reminder of free-wheeling times past, even if her politics don't fit. In an aside she mentions she voted for George W. Bush—twice. Give her back the good old days, when going through security checks at the airport didn't mean you had to remove all your chunky necklaces and rings, and people didn't look sideways at you in your barely tamed hair and hippie weeds.
Responding to a call from her former husband Pete (Kevin Kline) that their daughter Julie (Mamie Gummer, Streep's daughter in real life) has attempted suicide after her husband left her, Ricki makes the journey to be by her side. The tidy hedges and gated communities of Indianapolis where Ricki's ex lives with his new wife, is a foreign country until she bonds with the family poodle and spies some pot in the freezer.

It's not as though Ricki doesn't carry her share of maternal guilt for having deserted her children when they were little, just a lot less than most. The drama makes way for this to be beautifully expressed in her performance of 'Cold One', a song she wrote and sings to Pete and Julia one evening, before stepmom Maureen (Audra McDonald) returns home after a few days away.

We've known since Postcards from the Edge that she could sing and since Mamma Mia! that she could groove, but here she is quite the Linda Ronstadt or the Chrissie Hynde. One of the screen's gifted chameleons—think Iron Lady, Evil Angels, and The French Lieutenant's Woman—Streep is, as always, utterly convincing as an aging rocker. Having established her credentials in serious roles, she can afford to let her hair down.

The screenplay is the work of esteemed creatives behind the camera too, the talented writer Diablo Cody (Juno, and episodes of TV's United States of Tara) and director Jonathan Demme (The Silence of the Lambs, Philadelphia and The Manchurian Candidate).

There is a big singing and dancing finale. It is, after all, a wedding reception, and as such a gesture of hope towards the future, however Ricki and the Flash could have done with a brisker wrap. We've seen that Demme has a soft spot for Neil Young, and music is perhaps his indulgence, but contemporary audiences have a low tolerance for things being drawn-out or for a great deal of sentiment in their melodrama either.

It's worth remembering, however, that we tend to allow Bollywood the same indulgence in the big singing and dancing wrap, and anyone knows that the relationship difficulties aren't usually resolved on the dance floor. So enjoy.