MOTHER, WIFE AND THE COMPLICATED LIFE 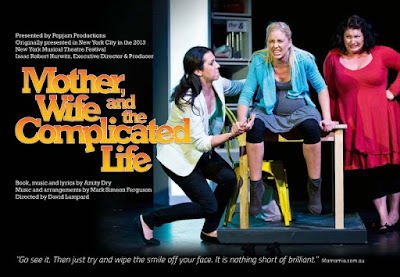 ‘Mother, Wife and the Complicated Life’ is one of those shows where you go along and recognize yourself as one or all of the characters onstage.  It’s about four women friends – one single and pregnant, one married with three young children, one about to get married and one in a troubled marriage.

Amity Dry, who wrote the book, music and lyrics, also performs one of the girls in the show.  The performances of all four women are excellent.  They sing well and harmonise beautifully where required.  The book gives them all meaty characters to play and they are all convincing and appealing actors.

The attractive set has been designed to be able to represent various settings easily.  The lighting plot enhances the set very nicely.  There was no program, so it’s not possible to mention who was responsible for these aspects.

David Lampard has directed the show very well, keeping it moving at a good pace with smooth transitions between scenes.

I was not impressed by the music, however.  It’s a stream of consciousness type of score, so there are no standout songs.  About halfway through the first act, every song started to sound the same.  In addition, the show is too long for what it is.  It had made its point by interval and would have been more effective with about 30 minutes cut out and played without an interval.
Posted by Canberra Critics Circle at 11:07 AM