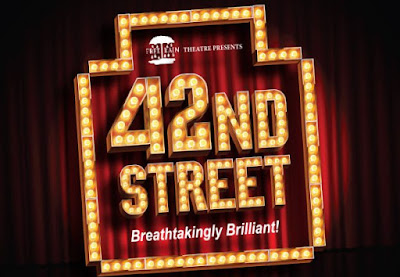 The simple plot concerns a chorus girl from apparently dull and boring Allentown in Pennsylvania who steps into the starring role to save Broadway show, ‘Pretty Lady’, when its star breaks her leg.  Chris Baldock’s high energy production captures the spirit of the 1930s with good characterizations and one spectacular musical number after another.

The cast are uniformly excellent.  As the chorus girl from Allentown, Sophie Highmore is believable and delightful as the naïve young woman who can dance and sing better than any leading lady.  Jarrad West gives a fine performance as the tough director of the show, Julian Marsh, and Sam Ward performs singer-dancer, Billy Lawlor with great style and assurance.  Louiza Blomfield plays the temperamental diva, Dorothy Brock, without resorting to cliché and gives us a rich characterization that is very human.  Karina Hudson, Debra Byrne, David Cannell and Michael Miller are all terrific in the supporting roles.

As good as the leading and supporting players are, it’s the chorus of this show that makes the biggest impression.  In number after number, this large group sing confidently and accurately.  They dance Michelle Heine’s excellent choreography with extraordinary energy and enthusiasm.  They must be the fittest actors in town.

Strong musical direction by Nicholas Griffin has resulted in good vocal performances by everyone in the cast and Ian McLean’s conducting of the large orchestra produced a distinctive and pleasing 30s era big band sound.  Many of the costumes were obtained from the CLOC company in Melbourne but Head of Wardrobe, Fiona Leach, has done an excellent job adding to and co-ordinating the large set of costumes for the company.

The Q Theatre has no fly tower so that puts limits on a set design for this complex show.  The set by Martin Searles and Susie and Steve Walsh, working to Chris Baldock’s design concept lacked interest and some set pieces didn’t work well at all.  There were also some opening night glitches with lighting and sound.

Nevertheless, this is a really spectacular and highly entertaining production that shouldn’t be missed.

Len Power’s reviews are also broadcast on Artsound FM 92.7’s ‘On Stage’ program on Mondays from 3.30pm and on ‘Artcetera’ from 9.00am on Saturdays.
Posted by Canberra Critics Circle at 10:12 AM