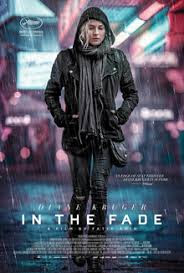 One of the earliest films by the Turkish-German director Fatih Akin was called Head-On, released in 2004. It was tough and compelling, pulling audiences into the intense orbit of its star-crossed lovers who were trapped as only people caught between two cultures can understand. I was transfixed and have continued to look out for his work ever since.

Head-On is easily confused with the Australian film of the same name, Ana Kokkinos’ film of 1998 with Alex Dimitriadis as a troubled young Greek-Australian. By fascinating coincidence, both films explore life in the cross-cultural space, and are somewhat similar in tone.

Besides this latest film, In the Fade, Germany’s entry in this year’s foreign language Oscar, Akin’s most high profile film so far would be The Edge of Heaven, a drama detailing the complicated life in Germany of people of Turkish descent. Parallel worlds, you would say.

From his base in Hamburg, where he was born and raised, it is natural that Akin should have these concerns. His perspective is not always dark. He created a good-natured neighbourhood diner party out of his 2009 film, Soul Kitchen, but In the Fade does return with pessimism to vexed cross-cultural issues that concern us all.

It is played out across the finely chiselled features of blonde German actress Diane Kruger. Her face is the canvas on which the drama is performed after her husband of Turkish descent, Nuri (played by Numan Acar), and their little son Rocco are the victims of a bombing targetting the family business. Katja’s face fills the frame as the tragedy takes hold.

As she waits for confirmation, police take toothbrushes away from the family home to determine IDs, then return, within hours of the crime, with their questions. Katja’s parents and in-laws and friends in attendance are against the insensitive timing of this interrogation but she allows it. Why? Is it because her instincts tell her straightaway who the perpetrators are?

Katja remembers a young woman she spoke to outside her husband’s office minutes before the attack. She was parking her bicycle. It was new, but she wasn’t securing it. Strange, Katja thought, and the hunch is sound. When the matter goes to court, with her lawyer friend Danilo (Denis Moschitto) handling the case for her, things do not pan out as they should.

The evidence incriminating the young neo-Nazi couple who are arrested and charged with the crime appears to be reasonably sound, but the court proceedings take a perverse turn that pulls you up short. Clearly, the film intends to show how someone might feel and act when the system appears to be stacked against them.

Moreover, the reactions of her own mother and mother-in-law have already revealed a telling lack of empathy for Katja’s predicament. Though she does have the support of close friends, including Danilo in court – and maybe even some possibilities waiting in the wings?

Increasingly, however, and despite signs that there is hope the case can be reviewed and there are possibilities for renewal, she seems to grow more and more desperately – and scarily - alone.
Katja does give the impression of being something of a rebel. The drugs, the plentiful tattoos, including the tattoo of her circle of commitment. And there is the strong suggestion that neither her parents nor Nuri’s truly approved of the match.

In the Fade is told in three chapters. To begin with it is raining, continuously, heavily, like a tropical downpour, until the sky clears on Katja’s trip to Greece, when blazing sun appears like a bold horizontal wipe in the editing. The relentless clarity of the bright Mediterranean sunshine could bring on renewal, or a different kind of clarity altogether.

Taking its title from the song by an American hard rock band, Queens of the Stone Age, apparently, In the Fade is a perilous journey of the soul. It makes me wonder what the late German filmmaker Rainer Werner Fassbinder, who also consistently explored the plight of marginalised people, would make of the politics of Germany today.

It is a tough film, graced with a fine performance by Kruger, but the emotional authenticity that she portrays, doesn’t seem explained by the arc her character travels, particularly the surprising events in the courtroom that drive her to the final act.

In the Fade is a portrait of despair, well told with a powerful central performance, but such an inexorable journey that we are desperate to come up for air after the final frames.