A Pacifist's Guide To The War On Cancer - Canberra Theatre 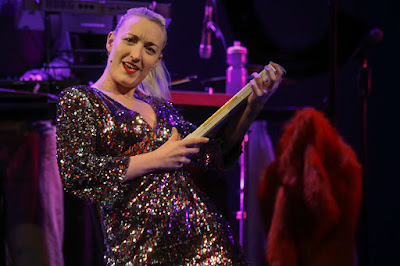 “A Pacifist’s Guide to the War on Cancer” borrows authenticity from the real in a theatrical event that scrubs always fictions about cancer.

Writer and performer Bryony Kimmings opens the show by introducing herself as the writer and narrator, establishing direct communication with the audience. Perched atop a stand looking down on the action, she seems to be writing the show as it happens.

Kimmings describes a dramatic opening to the show where a foreboding sign reading “cancer” swings above the audience like the chandelier in Phantom of the Opera, a deliberate contrast with the humble cancer logo fixed to the stage wall.

This is a play about making a play: the story starts with Bryony getting a grant to make this show, and then narrates the interviews, experiences and friendships formed during her research into the “emperor of all maladies”, cancer.

Inspired by feminist theory, the play rejects cancer narratives of battle and struggle, and especially the sentimental depiction of cancer in popular media. The “play about a play” approach is used to show the lived experience of cancer, especially the unique challenges of women who enter Susan Sontag’s “kingdom of the sick”.

Central to this approach is the presence of Lara Veitch, who with the rare Li-Fraumeni Syndrome that weakens cancer resistance has already survived six cancers. Veitch plays herself in her own story, and at one point provides humane tips for supporting people with cancer, everything from staying in touch to asking people what food they would like after chemo.

To further debunk the show’s theatricality, Kimmings draws our attention to the fact that one of the performers is her sister, Lottie Valois. Valois even plays the “past” Kimmings in some of the scenes that Kimmings narrates. The play also draws on recordings of interviews with cancer sufferers, with the actors providing these verbatim voices with bodies.

And if that wasn’t enough all happening at the same time - it’s a musical.

While the play tries to establish authenticity by flouting theatricality, it is not above using theatre’s methods. The anti-theatre methods are used to justify the flashy, entertaining songs about cancer. Near the end of the show the carefully built community theatre aesthetic was used as set-up for an unexpected theatrical trick. As powerful as this moment was, it seemed counter to the ethos Kimmings promised at the start of the show.

At the end of the night the performers abandoned the idea of creating a show and sat on the stage in direct conversation with the audience. This moving finale had the audience asked to name people in their lives who had been touched by cancer, and many audience members called out the names of loved ones.

“A Pacifist's Guide to the War on Cancer” is a play that tries to not be a play, so that it can more fully showcase the reality of living with cancer. It debunks myths about cancer, and manages to be simultaneously flamboyant and sincere. This split could divide audiences, who only enjoy half the production: those that can knot it all together will enjoy challenging, moving theatre.
Posted by Canberra Critics Circle at 6:01 PM