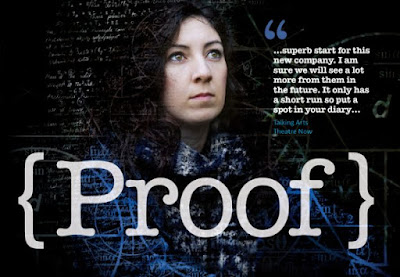 In 2001, ‘Proof’ won both the Tony Award on Broadway for Best Play and also the Pulitzer Prize for Drama.  The play focusses on Catherine whose father, a brilliant mathematician, has just died after a long illness.  In the days immediately following his death, Catherine’s relationships with older sister (Claire) and young student (Hal) are tested.  The issues of sibling rivalry, mental instability, trust and genius are brought to the surface with an electrifying discovery in Catherine’s father’s papers.

This thought-provoking play has been well-directed, originally by Derek Walker and by Tyran Parke for the current tour.  All but the father character of the original Sydney cast are in this touring production.

Former Canberran, Ylaria Rogers, returns to this region for the first time professionally as Catherine.  She gives an excellent performance of great depth in the role of the troubled daughter.  Appearing mostly in flashback, Gerald Carroll really gets under the skin of the father character, Robert, and plays his conflicting aspects very well.  Alexander Brown as Hal, the student, achieves a nicely naïve quality as a young man with his own self-doubts and dreams and Julia Christensen gives a strong performance as the well-meaning but pushy older sister, Claire.
Set design by Jeremy Allen is attractive and substantial.  Lighting designed by Alex Berlage provides a strong atmosphere for the outdoor setting and cleverly signals the shifts in time as the play progresses.  Costumes by Christopher Pitcairn, based on original costume designs by Caitlin Hodder, have been well-chosen for the characters.

The play is unpredictable as it progresses.  The first surprise, occurring early in the play, grabs your full attention from that point onwards.  You’re then drawn deeply into the action and really care for these characters.  Beautifully written, directed and performed, it’s a play you’ll remember for a long time afterwards.

Len Power’s reviews are also broadcast on Artsound FM 92.7’s ‘On Stage’ program on Mondays from 3.30pm and on ‘Artcetera’ from 9.00am on Saturdays.
Posted by Canberra Critics Circle at 10:18 AM