Parting the Red Curtains - The Q 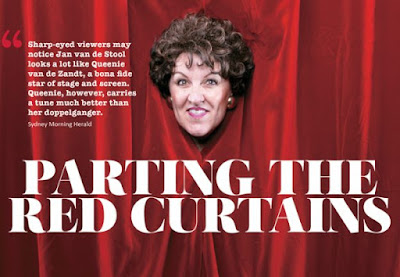 Review by John Lombard
Being in the company of Jan van de Stool (Queenie van de Zandt) is like watching a hurricane wreak havoc in the distance, and praying that it steers toward someone else.

Van de Stool is the eye of the storm, calm and authoritative as she talks about her role as mentor to celebrity luminaries such as Beyoncé, Kylie Minogue, and Cate Blanchett. This star struck music therapist from Woy Woy dispenses wisdom about the arts with the granite confidence of a Stella Adler.

While van de Stool has poise, those who stray too close to the hurricane inevitably lose theirs.

Extensive audience participation has us pretending to be dodgem cars, or answering trivia questions about Cabaret to identify the biggest “homo” in the audience. Van de Stool had no problem with yanking us out of our comfort zone.

In an apparent blood feud against Canberra’s theatrical Dunham family, van de Stool separately invited both Amy and Josie Dunham onto the stage. A scorching roast for Amy Dunham bought expensive publicity for the production of The Wedding Singer she is directing, with Amy taking some wicked barbs with a lot of humour. Amy also performed a beautiful rendition of a famous song by a French prostitute.

Josie Dunham’s platinum locks made her a stand-in for the unaccountably absent Cate Blanchett, answering increasingly bizarre questions about a fictional movie that she - Cate Blanchett - had written. Amy returned to the stage, and the sisters performed a scene from the movie, with van de Stool giving firm acting advice from offstage.

Amy and Josie Dunham both endured their torture with a lot of grace, and by the end of what must have felt like a long night seemed to be enjoying themselves.

Van de Stool finally ‘Let It Go’ for the finale, with her Queenie persona taking control for a musical number. It was not always obvious who was pretending to be who, and I suspect that is the way Queenie and Jan both like it.

If the title of the show isn't enough of a clue, the performance was spiced with many seedy and glorious innuendos, always delivered with nonchalance that made them funnier.

Rather than finding humour in a delusional music teacher from Woy Woy, Parting the Red Curtains embraces the humble grandiosity of this whirlwind character, and makes us the joke: never has it been so agreeable to be told that we won’t achieve our dreams.

A genuinely delightful and openly bonkers night of entertainment - but if van de Stool spots you, play dead.
Posted by Canberra Critics Circle at 6:23 PM