To the majority of Australians, the name Muriel Matters would mean nothing. That is one very good reason why anybody with an interest in history and the fight for women suffrage should see That Daring Australian Girl, currently playing at the Arch at Holden Street Theatres. Another reason is to see the outstanding performance by Joanne Hartstone in the title role. She inhabits the Adelaide born elocutionist and actress who became a staunch advocate for the right of women to secure the vote in England with charm, passion and an assertive will.  Hartstone tells the story with fervent conviction, capturing the innocence of the young girl with a desire to follow her heart and mind, maturing into a woman, determined to uphold the democratic ideals of equality for all no matter what the sacrifice or the cost. Hers is a story of dedication, courage and resolve in the face of derision, conflict and danger and Hartstone rises magnificently to the challenge of breathing life into her heroine while avoiding the pitfalls of historical fact telling. The audience is captivated, enchanted and committed to Muriel’s mission. At her final acknowledgement that it is character, not wealth or status that matters, the audience cheer, rising to their feet to applaud a woman who fought for justice, democracy and equality and an actor who brought her to life again upon the stage. 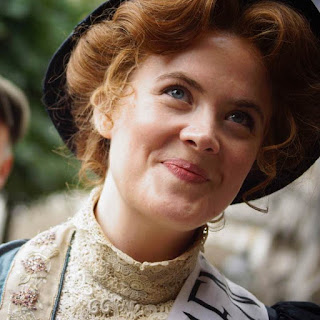 Designer Tom Kitney has paid reverence to the woman and her period from the late Nineteenth century to the years after World War 1 when the English parliament finally granted the vote to women thirty years or so after the same right had been granted to South Australian women. The simple touring set is tastefully furnished with a bentwood chair, cedar desk, long mirror and table lamp that suggest the period. The stone church at Holden Street Theatres provides the perfect atmosphere for this historical account of a remarkable woman’s life and exploits. Silent Movie texts are projected at the back of the stage as chapters in Muriel’s life from elocutionist to actress to activist, prisoner, campaigner, lecturer, agitator and fiancé. In London she meets George Bernard Shaw and William Archer and is inspired by their ideas and political beliefs. She splits with the Followers of Emily Pankhurst and flows the democratic ideals of the Women’s Franchise League.  She hurls campaign leaflets rom a dirigible above London, grieves for a brother killed at Gallipoli and marries, later in life, a doctor, It is a long life lived to the full.
The production pays attention to detail, transporting us to the turn of the Nineteenth century and for an hour cajoling us to that willing suspension of disbelief. Costume designer, Nikki Fort, has created a bespoke costume for Hartstone with attention to every detail of the period. The music used has been taken from the programme of the White Star Line Orchestra that would have been playing on the long six week voyage to England. At the end of the epilogue, a photo appears, depicting Matters in a balloon basket. A breeze from the wings coincidentally stirs the material and the image appears to come to life. It is a reminder that the fight lives on, the campaign continues and the hope remains.

Director Nicholas Collett never allows the text to be subsumed by fact, or the performance to suffer the staleness of function. Each episode is clearly presented, vivid slices of life, performed with obvious affection for Matters and admiration for her feats and achievements. That Daring Australian Girl is not only a delightful theatrical excursion. It is an illuminating comment on all women who dare to question and demand a democratic right. It is a struggle that continues to persist, and although the struggles of the Women’s Franchise League have opened the doors to progress, That Daring Australian Girl reminds us all that the hard fought victories of the past are milestones in the struggles that remain. That Daring Girl is the stuff of a first class history lesson and a wonderful theatrical treat.
Posted by Canberra Critics Circle at 10:48 AM