BLUE: The Songs of Joni Mitchell 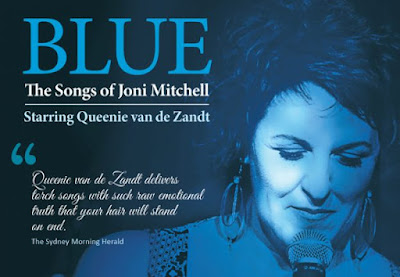 ‘BLUE: The Songs Of Joni Mitchell’, written and performed by Queenie van de Zandt and Max Lambert, gives an absorbing insight into the singer/songwriter’s life as well as her music.

Joni Mitchell has had a long career but her most-remembered songs are from the 60s and 70s.  With influences from various types of music, Mitchell's songs are deeply personal and cover all aspects of the human condition, making them easy for us to relate to.  A Canadian by birth, she suffered from polio as a child and struggled with formal learning at school.  She gradually became a singer and gave up a child for adoption, a situation that haunted her song writing for many years.  Over a long career she released many albums.  Her 1971 album ‘Blue’ is often cited as one of the best albums of all time.  She has won numerous Grammy awards for her work.

Queenie van de Zandt sings the songs with great depth of feeling.  She puts her own stamp on these much-loved songs but the spirit of Joni Mitchell’s originals is still there.  It’s sometimes hard to accept a new interpretation of a song deeply etched into your mind over the years by a particular singer but Queenie van de Zandt is a good singer and her delivery is emotionally truthful and very appealing.

The recorded narration of Joni Mitchell’s history is interspersed with reminiscences by Queenie van de Zandt as Joni herself.  Surprisingly, she performs the character with an Australian accent but there is a point to this, as you will find out at the end of the show.  It’s a good script with just enough information to complement the chosen songs and draw you deeper into the world of Joni Mitchell.

Max Lambert on piano is the lead instrumentalist on the show.  Hugh Fraser on double bass and Roger Locke on guitars provide a fine accompaniment, too.

This was a pleasant and memorable evening filled with fine singing by Queenie van de Zandt in this tribute to one of the great singer/songwriters of our time.

Len Power’s reviews are also broadcast on Artsound FM 92.7’s ‘On Stage’ program on Mondays from 3.30pm and on ‘Artcetera’ from 9.00am on Saturdays.
Posted by Canberra Critics Circle at 3:10 PM