My first thought while watching Neil Armfield’s Glyndebourne production of Brett Dean’s operatic composition of William Shakespeare’s Hamlet was to ask myself, “Why has Shakespeare’s most enigmatic tragedy not been composed before? How did it escape the Verdi canon? Dean answers this partly in the programme when he says, “My initial response was to say no, that I couldn’t possibly tackle something so big.” My second thought was to express my gratitude that Dean dared to take on the Herculean task over five years and create a superb reimagining of Shakespeare’s tragedy in operatic splendor – powerfully dramatic, splendidly staged, musically evocative and totally absorbing. Librettist Matthew Jolcelyn has wisely and creatively pared back the text, eliminated scenes and superfluous characters and taken licence with the sequence of Shakespeare’s narrative. The arrival of the Players in Act Three does not occur. The second gravedigger does not appear.  Rosencranz and Guildenstern survive the ship voyage but are slain by Hamlet in the final scene of the opera. And yet, as it must be, Dean’s opera remains entirely true to Hamlet’s central dilemma of how to avenge the murder of his father by his uncle who has since married his mother and assumed the throne of Denmark. 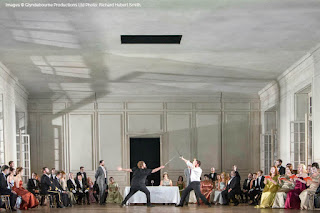 It is in every sense the epitome of an Aristotelian tragedy, in which the fatal flaw of a noble hero brings about his irrefutable downfall. The drama, the consequence and the tragic inevitability of Shakespeare’s plot reverberates in every moment of Jocelyn’s libretto and Dean’s colossal score. It is as if every moment has been composed on the rehearsal floor with the singers. Each movement, each scene has been orchestrated with an immediacy to capture the moment, to reveal the character, to further the plot and to keep the audience on the edge of their seats. From the very moment you enter the theatre, the warming up of the orchestra raises an air of expectation. The curtain slowly rises to reveal a somewhat disheveled, troubled Hamlet (Alan Clayton), alone in the centre of the stage, gripped by torment and isolation. Bearded, dressed in a long coat and carrying weight, Barry appears as a student from Wurtemburg, returned to Denmark and an unimaginable family tragedy. A more mysterious sound accompanies the entrance of the dead king (Jud Arthur). The banquet room of the castle erupts with the glorious singing of the State Opera chorus as attendants, nobles and dignitaries of the Royal household. Under Chorus Master Brett Wymark, the chorus lend the production a dynamic sound, and I would have welcomed more appearances by this superb chorus of singers. They are also strongly supported by the The Song Company under Artistic Director Antony Pitts.
Armfield is the actor’s director. Dean is the singer’s muse. Together, they have inspired a brilliant cast to soar to the heights of emotional truth. Clayton is older than Hamlet’s nineteen years, but in his dishevelment, his confusion and his beguiling trickery, he inhabits the very nature of the tragic youth. Lorina Gore’s Ophelia, defiled and deluded, creates an extraordinary theatrical moment as her wails and vocal agonies drive her into the darkest pit of rejection and madness. Hers is an unforgettable and haunting performance, underscored by the soul-renting playing by the orchestra under conductor Nicholas Carter’s baton.
Each principal rises magnificently to the challenges of character and composition. Loyal friend, Horatio (Douglas McNicol) is played as a father figure to the tormented Hamlet. Cheryl Barker’s Gertrude, is torn between her love for her son and a painful guilt. Machiavellian Claudius (Rod Gilfry) is inevitably “hoist on his own petard” in a fitting end to his villainous fratricide. There is also excellent support from Samuel Sakker’s Laertes, his pontificating father, Polonius (Kim Begley) andcomical duo, Rosencrantz and Guildenstern (Rupert Enticknap and Christopher Lowrey)
In a final moment, contrasting the grand guignol horror of the onstage slaughter with Hamlet’s dying words, “The rest is silence”, the curtain silently and slowly falls on the Australian premiere of the Glyndebourne Festival production. It is a titanic reimagining of Shakespeare’s tragedy, a tour de force of contemporary operatic composition and a most worthy companion to earlier re-imaginings of Shakespeare’s works.

Posted by Canberra Critics Circle at 11:29 AM