In September 2004, Chechen rebels demanding freedom from Russian control, the release of political prisoners and peace for Chechnya, stormed the Beslan school in an horrifying act of terrorism and held hostage 1,148 fathers, mothers, teachers and children. Author, Carly Wijs at the request of BRONKS, a Belgian theatre company, creating programmes for young audiences, was approached to create a piece for the company. It was soon after the shocking terrorist attack on a shopping mall in Nairobi . One might assume that terrorism is a difficult topic to embrace with young audiences, and especially an event that took the lives of so many children. It is to the credit of BONKS and director/playwright Wijs and its two performers, Gytha Parmentier and Roman Van Houtven that this event can be handled so sensitively and so engagingly without the horror of gratuitous violence, and yet with the impact to suggest the effect of the attack on the lives of the people of Beslan and the world. There is no grotesque footage, no on stage violence and no emotional trauma. And yet Parmentier as a victim of the murder of innocent children and Van Houtven as a survivor of the siege play out the sequence of events with a degree of compassionate detachment. This is not a sensational and graphic depiction of the siege. It is an accurate and honest account as seen through the eyes of two young people caught in the most horrifying of circumstances.
The two actors leap onto the stage. They crouch and begin to chalk out the space with draughting skill, describing the various parts of School One including outbuildings, the canteen, the main building outlined on a back wall, and in the centre of the floor the gymnasium. There is no suggestion of the impending attack by an Islam militant group under orders by the Chechen warlord to invade the school at 9.07 0n the hot September morning. 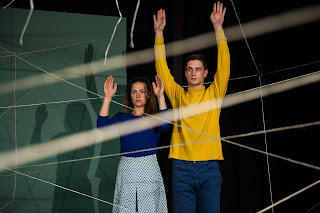 Then suddenly, the thirty five terrorists. Thirty three males and two females storm the school and hold the assembled adults and children hostage. The two young actors grab lines of string and create a network throughout the space to represent the wires of the bombs constructed by their captors. Helium filled black balloons are released to the ceiling to represent the bombs.
Throughout the performance, Parmentier and Van Houtven relate the terrible experiences during the three days. There is a matter-of-fact quality to the narrative, interspersed with touches of dark humour. Neither character is named as they represent all the student captives, those who survived the ordeal and those who died when the Russian security guards stormed the school, instigating the explosions and the collapse of the ceiling that fell on Parmentier’s character, crushing her beneath the heavy cement.

The play works on two levels. A young audience will learn of the layout of the school, the tension created by the terrorist who must stand motionless for two hours on the bomb to avoid detonation, the awkwardness of not being able to go to the toilet and the dire effects of dehydration throughout the three days. Adults in the audience may perceive it more vividly. A simple fact, delivered so honestly and without histrionics by the two natural actors may conjure an horrific image and a profound empathy.
Parmentier represents the dead girl, whose image on a stretcher was flashed across the world. As  Van Houtven traces the blood trickling on the left side of her face, the dead girl muses on her unfulfilled dream to be a television star.  She wishes they had filmed the other side. “It’s my prettier side.”she says. And the stage goes to blackout.
Wijs’s intention to avoid sentimentality and sensationalism nonetheless captures the horror of the situation through the superbly natural and adroitly physical performances of the two actors. Their account of the dangers and the fear is riveting theatre, which draws us in with its simple and direct  telling of traumatic experience. Humour and the suggestion of Mission Impossible alternative endings softens the real horror, so that our sensibility is not directed by catharsis but by judgement. It is this appreciation of the act of adult evil heartlessly inflicted upon the innocence of childhood that most effectively teaches our young about the world they inhabit and the nature of good and evil as depicted in the Beslan School hostage crisis.
It is a beautifully constructed and honestly performed play that, like all good community and youth theatre entertains and informs and instructs audiences of all ages.

Run through the sequence