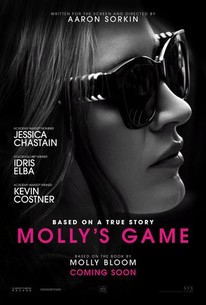 The bluff and counter-bluff of a poker game is no guarantee of a visually appealing and viscerally engaging experience, even if there’s something tangible at stake like a callow celeb losing a mountain of money. But if we're watching the young entrepreneur who orchestrates these illegal events, then we're talking.

Molly’s Game is an adaptation of a book by a young woman, Molly Bloom, who used to run clandestine poker games for wealthy and celebrity clients in Los Angeles and New York, high rollers with ten grand to spare for starters. Aaron Sorkin has adapted it for the screen.

The celebrated television and screenwriter behind The West Wing and The Social Network is in charge here as both writer and director. He is one of the best writers in the business, so who knows where this will project go.

The biggest surprise comes right at the action-packed start, revealing the trajectory that Molly (Jessica Chastain) was on before she became a poker entrepreneur. Before she left home in Colorado, Molly was a champion skier, Olympic material, but was badly injured in a jump on the slopes that put an end to her ambition, and that of her dad.

In a film that offers sparing insight into its main character, we see at least where the drive and ambition came from: her relationship with a terse, exacting, and emotionally withholding father. Larry Bloom, a psychology college professor, is played by Kevin Costner with some conviction. Although her mother was the skiing and snowboard instructor, she barely gets a look in.

After the accident and before taking up her place at law school, Molly leaves home. Declaring that she wants to experience more sunshine while she’s young, she heads for California.

While working as a cocktail waitress, she starts setting up poker games for her boss. Then she sets up her own, taking clients with her. Her great assets in this line of work, are not the obvious ones that she plays to – with plunging necklines, tight skirts and kohl eyeliner - but her quick intelligence and business acumen. Learning on the job, she googles poker terms and gamblers’ preferred mood music, and has soon worked out exactly how to do it all herself. 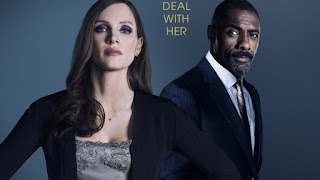 These developments would be, however, a lot more entertaining if Molly wasn’t in our ear telling us what she was doing all the while. Pervasive voiceover is one of the film’s problems.

Sorkin is obviously confident of his writing, and with very good reason. But in a medium more inclined to show than tell, the use of voiceover is excessive, even though Chastain is terrific in the role, delivering her lines brilliantly at breakneck speed.

What do we know about Molly? Her personal relationships barely develop, even with the personable lawyer, Idris Elba’s Charlie Jaffey, she approaches after the FBI catches up with her. He eventually agrees to handle her case and the ensuing relationship draws out some of the traits that evade us, but the veneer is barely lifted.

Sorkin could have opted for a light-headed crime caper but he seems more intent on extracting a serious point. But what point, exactly?

Molly is clearly a gutsy heroine, but the suggestion that she is in some way a feminist crusader seems misplaced. Sorkin’s main character might have prospered better in another field to stake this claim.
In her book, the real Molly Bloom had amazing opportunities to observe some very powerful men, clients the film declines to name. A few more are named in her book, but would this have made a difference to the film? It's unlikely.

The problem is for me, that as it stands, this story of a questing young woman, a prime mover in a man’s world, lacks insight.

Molly is sharp and entertaining company but eventually there is too little depth to her and too much emphasis on the game—the game of life, perhaps?—and how it’s played to sustain the lengthy running time.

Perhaps one of Larry Bloom’s psychology colleagues could have been drawn in to help out.