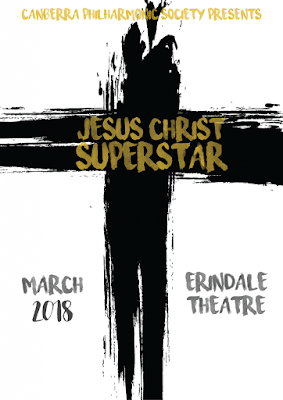 ‘Jesus Christ Superstar’, the rock opera based on the life of Jesus, first appeared as a concept album but it was the London production that opened in August 1972 that really put the show on the map.  It became the longest running musical in West End history at that time.  Ever since then, the musical has continued to be a perennial favourite of professional and amateur companies around the world.

Jim McMullen’s new production for Canberra Philharmonic is a dazzling, highly entertaining show that tells the story of Jesus clearly and in a consistently modern way that really engages the senses.  The attractive rotating set, co-designed by Ian Croker and Jim McMullen, gives lots of different playing areas and the exceptionally good lighting design by Phil Goodwin complements the settings and gives the show the right atmosphere.

Performances by the whole cast are committed and of a very high standard.  Will Huang gives a very strong performance as Judas and his singing of the high notes is thrilling.  Grant Pegg is a particularly good Jesus, playing him as an ordinary man without any hint of holiness.  His singing is assured and exciting, especially his Gethsemane solo.  Charlotte Gearside gives a strong acting performance as Mary Magdalene as well as singing the role with clarity and great feeling.

There are good performances from Ian Croker as Pontius Pilate, Paul Sweeney as King Herod, Patrick Galen-Mules as Peter and Rhys Madigan as Simon.  The large ensemble sings and moves very well.  The choreography by Courtney Whitcombe, Karen Gillingham and Charlotte Gearside nicely suits the modern concept of the show.

Musical direction by Casey White is excellent and the playing by the large orchestra is accurate and colourful.  Costumes by Chelsea de Rooy and audio design by Nick Cossart add considerably to the success of the show.

This is a very good production of a much-loved show that should not be missed.

This review was first published in the Canberra City News digital edition of 9 March.

Len Power’s reviews are also broadcast on Artsound FM 92.7’s ‘On Stage’ program on Mondays from 3.30pm and on ‘Artcetera’ from 9.00am on Saturdays.
Posted by Canberra Critics Circle at 7:50 PM