Flamenco fires Israel Galvan’s soul. It courses through his body like an electric current of sparking energy. His feet ricochet with the earth as his arms slice through the air with hands flicking and fluttering and raising the spirit of his dance to the sky. Each gesture is a musical note. Each driving rhythm of the feet stamps the earth with astounding agility and athleticism.

There is grace in the eloquence of his dance, comedy in the self-mocking surprise, and the unmistakable macho arrogance of his technical mastery. His body segments, arms flailing the air, feet forging the staccato beating of the ground. He enters in an apron, warming up like a conductor with his orchestra before rousing his instrument, his body, to an astonishing display of passion and technique. Like a jazz musician, Galvan creates his own distinct interpretation of a tradition passed down through the centuries and embedded in the spirit of the Spanish people.
Galvan’s Flamenco is the dance of the streets of Seville, the caves of Granada and the fields of Andalucia. It is the dance of Duende, the longing and the purging of the struggle that one finds in the poetry of Lorca.  It is the song of rebellion, the song of love and desire and the song of defiance. Galvan’s flamenco surprises and shocks. His gestures break free from tradition and his hands beat out the rhythm upon his bare abdomen or his feet pound an accompaniment upon the pedals of the bass drum. Suddenly at one point he whirls into a pirouette or continues the percussive beat along the auditorium walls. And then, in an instant, there is stillness, a silence that fills the theatre with the air of expectation. 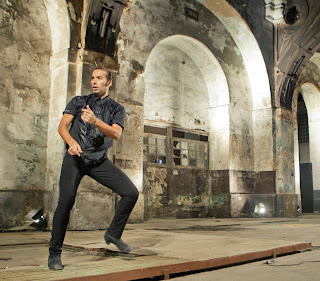 Gradually the musicians enter, Firstly there is Eloisa Canton, the violinist, and the only female in the group. Then the drummer on the timpanies and kettle drum. And then the saxophonist and the guitarist,  join the two singers. The wail of duende on the wind rings through the theatre as the guitar strums the spirit of the flamenco. Galvan begins to clap the hands and the palmas carries through the group, rhythmic and enticing. It is the music of the corrida and the guitarist, Caracafe, accompanies his own pasa doble.
Music, song and dance fuse in a celebration of life, its pain, its joy and its defiant struggle. They arise from deep within the soul, a cry from the heart that even from the proscenium arch sweeps across a mesmerized audience, caught up in the fervent longing of the strident song and the sheer mastery of Galvan’s control and liberation. He is free of traditional constraint, an unique exponent of the duende of the dance.
At one point, the stage is silhouetted in tableau by the amber backlight. The dark outlines of figures on the stage stand motionless for a long while, transfixed, beautiful and suspended in time. And then the deep throated song cuts the air, the musicians join in and Galvan leads his troupe towards their final flourish– in a dress. We are never allowed to take the iconic dance of his people too seriously and are constantly reminded that dance is the liberation of spirit, the celebration of life and the conquest of struggle. 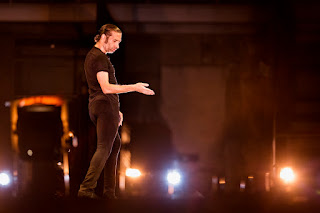 The audience leaps to its feet in ovation. Transported and thrilled, their idea of flamenco for those who may recall the fiery spectacles of Luisillo has been transformed by a master of the dance and his company of musicians and singers.  It has been an evening that they will never forget.