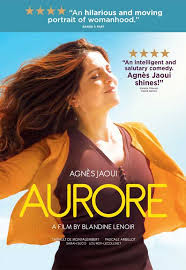 You’re never too old to start again. If life starts unravelling, it’s what the baby boomers want to hear: there’s a new dawn.

As played by Agnes Jaoui, Aurore is as voluptuous and as statuesque as the Roman goddess of dawn, after all, though I think the original French title, I Got Life!, has the edge. Her husband has recently deserted her for a new arrangement, so she has to make a go of it again, at work and in love.

Despite the disadvantages of being a single woman in France at the age of 50 or so, Aurore puts a brave, possibly even heroic, face on it and manages her life well with a positive attitude. I’ve found statistics that show France doesn’t do too badly on gender equality in comparison to its European neighbours, so perhaps things won’t be too hard for her, after all.

Aurore’s biggest problem seems to be her hot flushes. A ruefully funny one for women, and Aurore is beset with them, at home and out and even while asleep. It has to be said that the bravest thing about this gentle comedy directed by Blandine Lenoir, is its subtext: menopause. 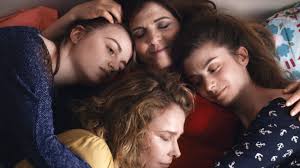 Like every mother, Aurore is concerned for her daughters, Marina (Sarah Suco) and Lucie (Lou Roy-Lecollinet). The elder one has just become pregnant, and though she is around 30, she is a bit of a worry, while the boyfriend of her younger daughter doesn’t exactly fill mum with confidence. But there you go. Quoi faire?

Aurore’s best friend Mano (Pascale Arbillot), who works in real estate, has some dirty tricks up her sleeve for men she reckons deserve the treatment. When the two friends are at a café together, Mano spies an older man with a young woman who she reckons must be his lover. Mano leaps up and accosts them, throws her ring at him and stalks off. She didn’t even know him.

Nina Simone's song lends the film a bit of backbone, but also hints at what it might have been


Aurore, however, doesn’t go in for payback and seems on peaceful and decent terms with just about everyone, former husband included.

She is comfortable enough with herself to go to a school reunion, even at this delicate time. There she encounters the man she was with before she married, and the film’s incipient spirit of independence, fierce or otherwise, veers towards mature-age romance.

The voice of Nina Simone singing the song that gave Aurore its French title, I Got Life!, lends the film a bit of backbone, but it also hints at what it might have been. Aurore has little to do with the sentiments expressed in Simone’s songs such as ‘Feeling Good’ or ‘Ain’t Got No, I Got Life’.

Does Aurore really make a new start? You can be the judge of that, but don’t expect too much from this easy-going and mildly funny comedy.