The sign in the foyer of the Roslyn Packer Theatre gave the running time of the Sydney Theatre Company production of St Joan as one hour and thirty five minutes with no interval.  It was instantly obvious that this was not George Bernard Shaw’s original play. That ran for over three hours with Sybil Thorndike in the title role in 1925. 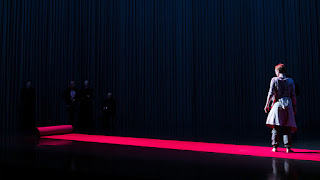 Instead, the audience was to be presented  in director Imara Savage’s production with a version that stripped away much of the original text, included monologues written with emerging STC Writer in residence Emme Hoy and that focused on the character of Joan, played by Sarah Snook. The result is a production of such power, such relevance and such emotional impact that it speaks to our age with startling immediacy. Savage’s passionate embrace of the themes of instinctive faith versus  the institutional dictums of the church and its dogma, the dominant male power of the state and the oppression of women screams out for reason from her programme introduction.
What emerges is an expressionist re-imagining of Shaw's play. The curtain rises on a bare stage with a lone figure in armour in a spotlight. Enter, all dressed in black, an English priest (Seamus O’Shea), a French Earl (David Whitney), a  Prosecutor (Socratis Otto) and a French Bishop (William Zappa) to debate the fate of the captured  country girl prior to her trial. The priest, clothed in British superciliousness cries for the stake. The Bishop strives for redemption from the curse of heresy. At the centre of this debate is the proposed fate of teenage Joan, the fighter, the dreamer, the agitator, the faith bringer and the agent for change- the daughter of her God! Her innocence, her fervour, her wiles may break the siege of Orleans in her battle to end a Hundred Years War, but it cannot break the power of men, threatened and intimidated by a girl from the farm who hears the voices of Archangel Michael and the martyred Saint Catherine and Saint Margaret. The debate is defined by the surgical precision of conflicting ideals and ambitions. Savage and her brilliant creative team construct a Brechtian arena of argument for an audience to judge.

In order to achieve this, Savage has thrust the character of Joan into the centre of the action, surrounded by her accusers and inquisitors against whom she is compelled to raill in a life and death battle for faith and reason. This reaches a climax in the final scene, when a distraught Joan is barraged with accusation and enticement by her male accusers directly hurling their charges and pleas for renouncement to the audience. The assault is merciless, the tension excruciating and the injustice heart rending.  On an open stage, Joan is cruelly exposed, a victim of the inquisitor, played with the steely assurance of irreversible reason by John Gaden, and with faith betrayed  and hope abandoned.

Throughout, flashbacks reveal the key events that map out the journey from the thirteen year old’s conversations with Archangel MIchael  to the seventeen year old’s  persuasive convincing of the Archbishop, also played by John Gaden, the weak Dauphin (Gareth Davies) and the General at Orleans (Brandon McClelland). A superb cast embraces the forceful purpose of this production. It explodes with conflict, argument and debate. War is waged. It is the fierce battle of ideas, of faith, of gender, of power, of territory and of minds, muzzled in a mire of obsession.

Savage’s production references Shaw’s play, written at the time of Irish conflict with the English over occupation, shortly after the end of the Great War and within a couple of years of Pope Benedikt’s canonization of Joan and more than four hundred years after Joan is declared innocent by Pope Calixtus lll. Today, St Joan appears as relevant as ever.  The Joan of Arcs of our time appear throughout the world to cry out Bernard Shaw’s reformist ideals. Emma Gonzales is the St Joan of the teenage uprising against school shootings. Malala Yousafzi is the St. Joan in her campaign against the Taliban and their oppressive prohibition of education. And Pussy Riot’s punk outcry against the Russian oligarchy dared to decry a regime bent on its unassailable supremacy.

At the very epicentre of this stirring and thought-provoking cry for reason and action is Snook’s charismatic, magnetizing and luminescent performance.  Snook’s St Joan appears as a role model for a new age. Snook is magnificent, capturing the religious fervour and naivety of the young teenager, the deep rooted belief in her mission of the seventeen year old and the fear and vulnerability of a woman, defiled , derided and doomed by powerful, ignorant men.
I leave the theatre moved by the plight of the patriot, outraged by the injustice of blind obstruction, and hopeful that the power of Bernard Shaw’s language, the sharpness of his acerbic wit and the wisdom of his plea to the world will echo in the directness, the drama and the power of this production.